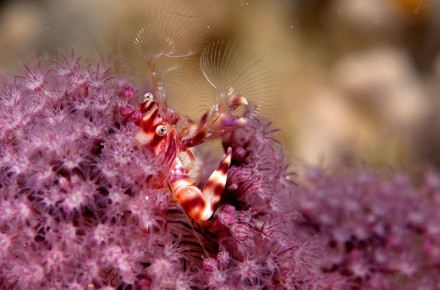 Text and photos by Andy Lerner.

I’ve always likened SCUBA diving in the ocean to visiting a foreign country. You don’t really feel like you belong there, you only know a little bit of the language, and your stay is temporary. If you’re an underwater photographer, you do everything you can to fight against every bit of that. You do your best to understand the behavior and customs in this foreign place so you can be at the right place at the right time for a photographic opportunity. 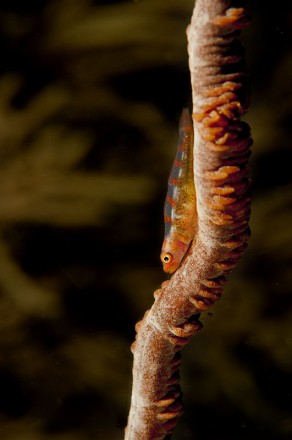 You try hard to blend in even though you’re the only one blowing bubbles. And you try your best to keep your breathing slow and steady to extend your time underwater for as long as possible. On top of all of that is the additional task of finding something unique to photograph in a world where nearly everything seems unique. It’s a place filled with strange and wonderful life, so settling on a subject is not easy. 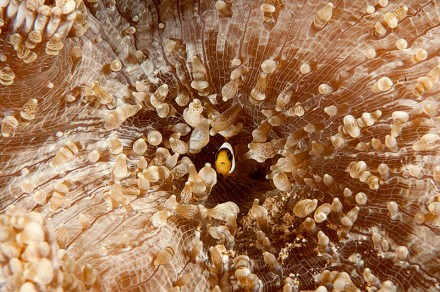 This search often leads me to macro photography. In an enormous place measured in miles, meters, and fathoms, working in millimeters is a pretty amazing experience. If you buy my foreign visitor premise, then working in macro is like looking for some weird little out of the way villages in that foreign country. Tiny outposts with tiny inhabitants. 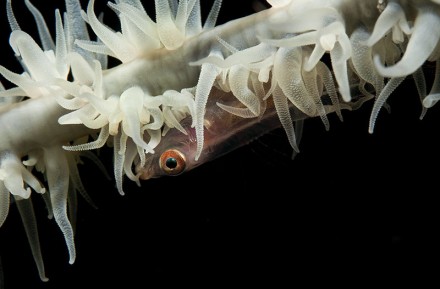 There is so much of this mini life going on that they really can seem like little civilizations. There are homes and territories, enemies and hideouts. There are places and times where the residents like to eat, and places and times where they like to get cleaned and groomed. This all takes some getting used to. Lots of study and observation go into figuring this out. But once you learn the ropes and get a feel for how things work, you can start to get a handle on how to find some worthy subjects. 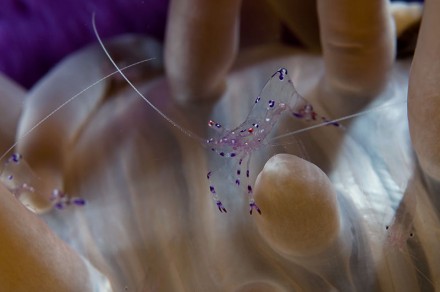 Keep in mind that the inhabitants I’m looking for are very small. Have I mentioned millimeters? Often smaller than postage stamp. Tiny. Little crabs, shrimp, baby cuttlefish, nudibranchs or fish eggs. A lot of stuff you might have to look up in a reference book later. Occasionally you find an extremely tiny creature living on another creature you thought was plenty small enough. It’s pretty amazing to say the least. 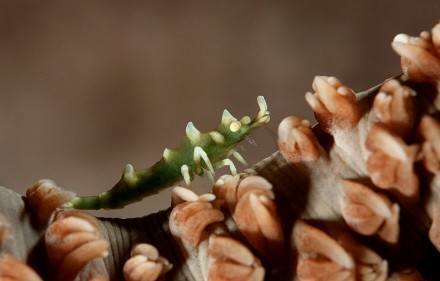 The good news is that after some experience, I’ve learned to tame my own sense of awe with this miniature world enough to try for a couple of decent shots. Once my eyes and brain adjust to working in this little environment, I get completely absorbed. A sort of tunnel vision takes over. My breathing slows. I block out the bigger stuff and train my eyes on the details. It’s one of the few times in my life when nothing else matters. It’s just me, the sound of my breathing, and whatever I can find. It becomes a kind of meditation. Can you tell that this is the best part of it for me? 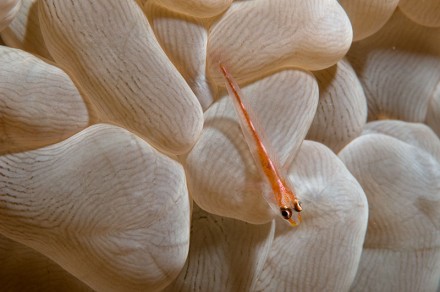 I look for little shadows or movement. Little phantoms scurrying out of my way. I look under rocks, in the sand, coral or on other animals. Many of these tiny things are camouflaged for their own survival. Brown on brown, red on red etc. It takes some concentration. When I’m lucky I might spot a pair of eyes reflecting back from my flashlight, or a shadow bolting into a tiny hole. Often, by the time I see movement it’s probably too late – whatever it was is already gone and what I saw may have just been a couple of grains of sand kicked up as it was leaving. When and if I finally I find something, I have to evaluate whether there’s a worthy composition to be had (which can be insane while shooting under a rock or through coral polyps and the depth of field is fractions of an inch). There are also tons of things that are interesting to see but make lousy subjects for an appealing photograph. Remaining motionless is maybe the biggest task, not only for the sake of the photograph, but so as not to scare the little critter away. It’s not unusual to use half of my dive just inching next toward a subject, working my way closer as it gets used to my being there. It fosters a sort of relationship where both you and the critter are waiting to figure out what each other’s next move is going to be. It’s a careful dance where your dance partner could leave the floor at any minute. All of the tension of the “dance” is in the continued cooperation of nature, and as we all know nature isn’t predictable or cooperative. But that’s exactly what brings me there. The challenge of experiencing and capturing something that is difficult or impossible to repeat. Sometimes you need to be satisfied with your first shot, because the strobe flash, or an awkward movement, or just the whim of the creature can be all it takes to finish your photo session. You don’t always get a 2nd shot. But occasionally you get lucky, and all of the stealth moves, calm breathing, and patience pays off. Maybe you get a few shots, and maybe you even get to try a few different ideas until you get something that works. When I return topside, the trance is broken and it’s a bit of a shock to the system. After spending an hour or more photographing a creature as small as a thumbtack, and being in that meditative state it induces in me, it can be jarring to deal with life-sized objects again… let alone people. It takes a few minutes. 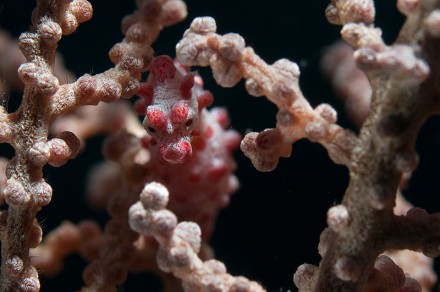 When I finally come around, it’s not unusual for me to come back to the boat to hear other divers talking about much bigger stuff they saw in the water while I was concentrating on macro. In Indonesia this past winter I apparently missed a 14 ft. whale shark. A 14 ft. whale shark is a very hard thing to miss. Unless of course you’re focused on other things. «Previous article
Saint-Petersburg, Childhood of many faces, by Yana Feldman