“Zapatistas”, heroes from the last century, by Jon Guido Bertelli 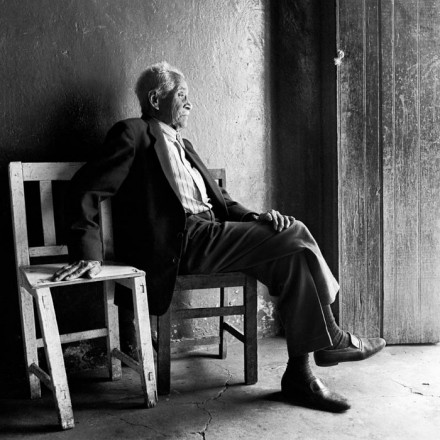 Text and photographs by Jon Bertelli.

Farewell my life, by Don Galo

I shall speak to the world and its people,
through poetry and poems;
although some cause great joy and happiness;
others cause pain, sorrow and sadness,
others cause displeasure, anger and rage.

It doesn’t matter! Such is time and life,
intricate with sadness and happiness,
anger and rage.

Farewell my life, my loyal partner;
I was a strong man, alluring and brave;
you gave me all you could offer,
thank you my life.

Day by day I’m drifting away from you;
seeking for a new joyful and eternal life,
of peace and happiness.

Farewell comrades of war,
my friends,
to you I bid this final goodbye,
farewell.

Original spanish version at the end of the article1 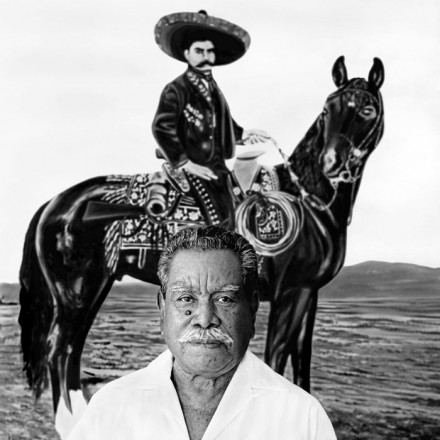 In the State of Morelos, during the Agrarian Revolution of the South, 1910-1920, Emiliano Zapata and his courageous fighters (men and women) battled fearlessly for the rights of their people against injustice, under the common cry of “Tierra y Libertad” (“Land and Freedom”).

I spent the greater part of the two years that I lived in Mexico, during the mid-late 1990s, in search of the last surviving Zapatista veterans from those distant years.

While the “kid” of those photographed and interviewed was 99 years of age, most of the other veterans had surpassed the magic age of 100, survivors from the last century. Three of the veterans passed away a few days after I met them. 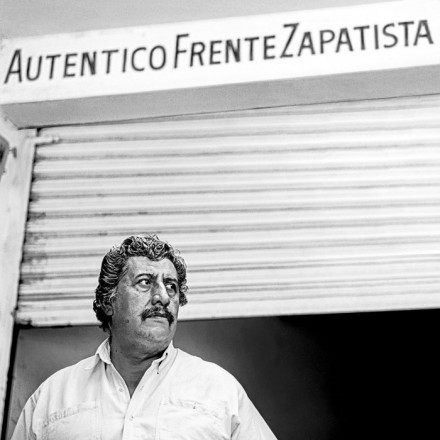 They were people who left their belongings behind to follow the heroic figurehead Emiliano Zapata. Finding refuge in the surrounding hills for up to 10 years and fighting guerilla warfare, dedicated to bettering the plight of the common man.

Their hardened character for survival was forged through years of battles, bloodshed and hardships.

Not only did they give up their own lives for their ideals, they even sent their own children to continue the fight.

Always friendly, they would welcome me into their homes, where they told me about their experiences and life during the revolution.
They talked with such passion about a past so close to their hearts, as if it were a part of their present. When I learned more about these intrepid people made frail and minute with the passing of the years, they reached dimensions of giants in my mind.

Most of the veterans whom I met, had been awarded for their bravery during the revolution with the medals of Merito Periodo Revolucionario and a few also with that of Legion de Honor. 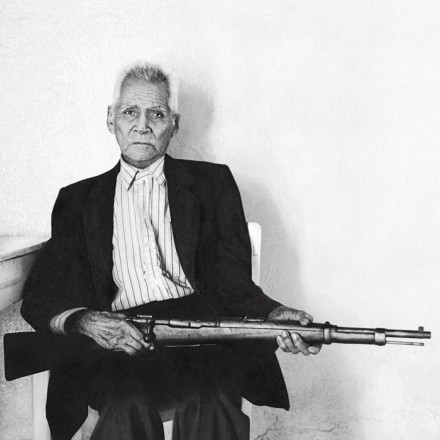 (Cavalry Lieutenant) Teniente de Caballeria Don Galo Pacheco Valle, joined the revolutionary forces of Emiliano Zapata in 1913, with his two older brothers and his trusted Mauser rifle. A survivor of many battles, he told me that the incoming bullets sounded to him like a swarm of bees and with a smile added that one of them bit off the lobe of his left ear. After the revolution he became a homeopathic doctor, a poet and the principal of a school in his small town of Cocoyoc. Even with the many years weighing on him, he was clear minded and still happily working as a homeopathic doctor when I met him. Not only a recipient of the Merito Periodo Revolucionario and Legion de Honor, but had also been honored by the state of California, U.S.A. He passed away in 2002; well into his 100s. 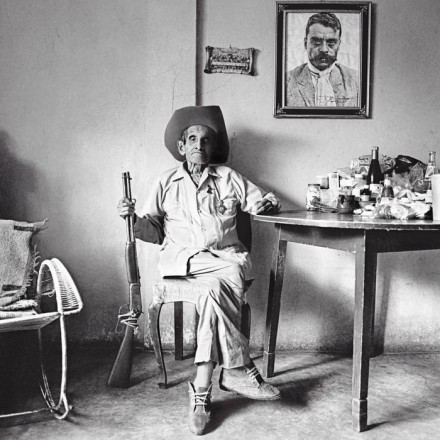 Don Vidal Paredes, born in 1898 and passed away at the age of 100. His weapon of choice during the revolution was the favorite of many Zapatistas, the classic Winchester 30-30, because of its quick lever-action firing power. I visited him on several occasions and always found him waiting for me under a portrait of Emiliano Zapata, with his Winchester in hand and a medal proudly pinned to his chest. His usually jovial eyes would become stern and fixed when telling me about the suffering of those far gone days, transporting me back in time with him. My good friend Don Vidal, passed away just a few weeks after his 100th birthday. 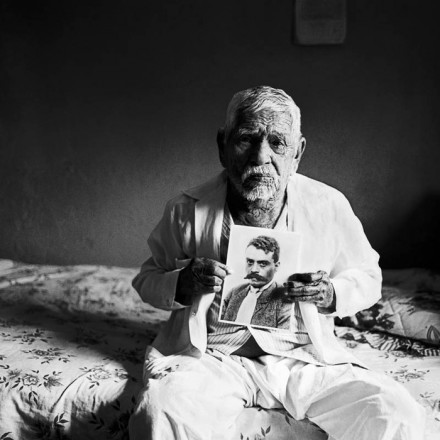 Dimas Leyva, born in 1892, loved life and singing corridos (Mexican popular narrative songs). A witness to the killing of Emiliano Zapata at the Hacienda of Chinameca, Morelos where his body was riddled by the many bullets fired by the soldiers waiting in an ambush.

When I first met Dimas, I found him sitting by the edge of his bed as he emerged in the darkness of the room, with only a faint light peeking through the slightly opened window. As soon as I told him that I wanted to photograph him, he quickly picked up an old print of his general, Emiliano Zapata, wishing to be photographed with him.
Being with his beloved general once again, filled him with such pride that the light in the room, appeared to concentrate on the two of them, like the spotlight on a stage.

Dimas passed away only a couple of days after I photographed him. 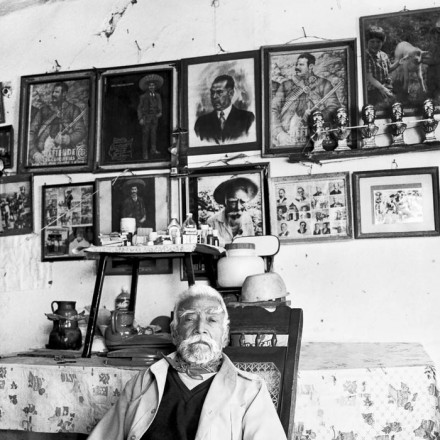 When I was first introduced to Cavalry General Pantaleón, I was welcomed by his thunderous voice and personality. I noticed his long bushy eyebrows; each turned the opposite direction of the other, as it having a life on their own. He was known in town for his past as a Zapatista fighter, for his lively personality, his enjoyment to work on his small parcel of land and his afternoon visits to the local “Cantina” for some Tequila.

He invited me to take a seat in his small living room, where he told me about his ideals and the battles in which he participated in. As he told me, while the many photographs and busts of Emiliano Zapata and Pancho Villa, pieces of his revolutionary memorabilia adorning the walls, appeared to be looking down at us with consent.

Suddenly he stood up, lifted his shirt to show me a large scar running across his belly and with his characteristic laugh told me that nobody believed him, that at his age, he would have survived the recent operation of removing a bullet that had been lodged in his body since the revolution. With a firm tone he said: “Mira, … nadie me creyó, pero aqui estoy mas vivo que nunca!” – “Si señor!” (“Look, … nobody would believe me, but here I am more alive than ever!” – “Yes Sir!) 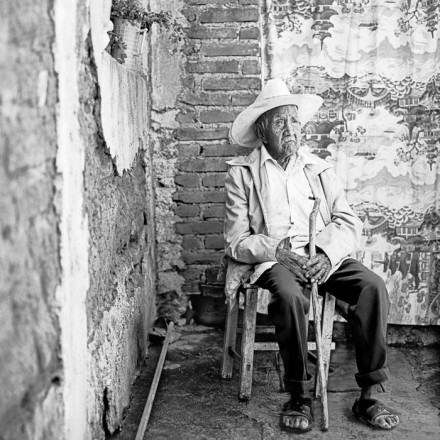 José Manuel Gabino Corona, a quiet and noble man with the rank of a captain in Zapata’s infantry. Although happy to have survived the revolution, he was sad about his many young companions who had died at a young age during those dreadful years of the war. 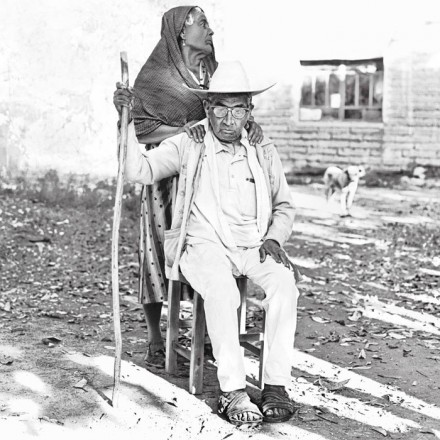 Marcelino Anrobio Montes, born in 1896. Marcelino fought and rode with Emiliano Zapata from the time he was just a young teenager in 1911, until the year when E. Zapata was killed in 1919. He had a severe and piercing stare that would only relax when his wife, a niece of E. Zapata was close to him, often with her arm on his shoulders or wrapped around him. Barely visible, their dog would follow them everywhere at a distance, guarding and keeping a watchful eye on them, aware of their fragility. 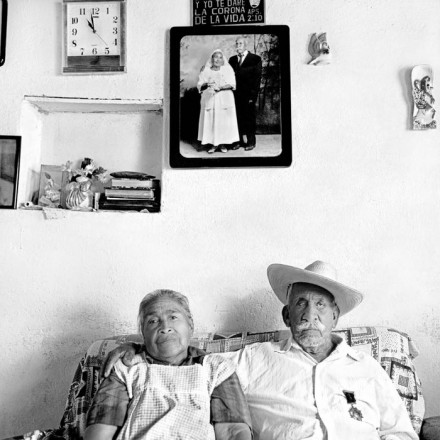 Benjamin Sanchez Medina and his wife invited me into their home, located in the small town of Chinameca, only a few blocks from where Emiliano Zapata, betrayed by Colonel Jesús Guajardo on April 10th – 1910, was shot and fell lifeless from his majestic horse “As de oro” (“Golden Ace”). Benjamin said with a sparkle in his one good eye (he had lost sight in one), “El caballo de Zapata no era cualquier caballo!” (“Zapata’s horse was not like any other horse!”) Benjamin and his wife still looked like the perfect young couple in love.

Their many happy grandchildren surrounded us while their friends peeked through the window, wondering about all the attention surrounding the old and proud warrior. How can I ever forget the sweet and determined girl who followed Emiliano Zapata and his troops? She joined the Zapatistas at a young age, at first carrying provisions, helping with cooking, rolling cigars for Emiliano Zapata, loading the rifles and later actively participating in the fighting. She was one of the many women who fought courageously in bringing a positive outcome to the armed struggle that they were part of.

At first she did not want to have her photograph taken, believing the photograph would rob her of her soul. Fortunately I had brought a Polaroid camera with me, I told her that I would take her photograph and give her soul back. As soon as I handed her the instant photograph and after taking a good look at it her face lit up with a big smile, she promptly positioned herself toward the warm sunlight and consented to let me photograph her. More than ten years have passed since I last saw my “Old friends”, they have left us to join their companions in arms and their “El Jefe” (“The Boss”, as he was also known) Emliano Zapata. I miss their quick wits and their positive outlook on life enjoying every minute of it, their strength and their noble ideals, which still echo through the hills of Morelos and across Mexico

I’m grateful to Zapata’s family members and the families of the Zapatistas who spent countless days with me looking for the veterans, without them this project would not have been possible. A special thank you to all my friends in the state of Morelos, they made my two years in beautiful Mexico a much more personal and special chapter in my life.