Text and photos by Michael Taylor

“Light is beautiful in itself, for its nature is simple and all of it is there at once. Wherefore it is integrated in the highest degree and most harmoniously proportioned and equal to itself, for beauty is a harmony of proportions.” 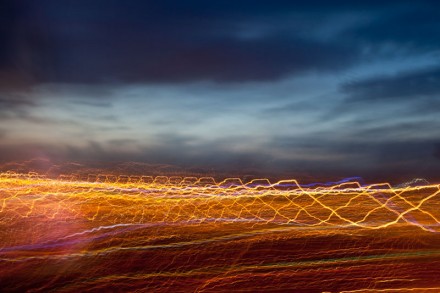 I first explored photography as a child taking photographs on film using ‘box’ cameras. In 1978 at the age of fifteen, my parents bought me a Praktica camera: I shot a roll of 35mm film and was hooked for life! A few years later I made a small darkroom in the loft of my parents’ home and loved watching the magic of black-and-white images emerge before my eyes. This experience will never leave me. I still have a good darkroom.

Although I loved drawing and art I always favored photography.  After my two science degrees at Queens University I completed Design BA and Fine Art MA degrees.

Light has always fascinated me throughout my life.

The qualities of light that excite me most are purity, harmony, paradox and unpredictability.  Light is “pliable” and can be merged, moved and shaped. However, there is always feedback: light reveals its own inherent possibilities. 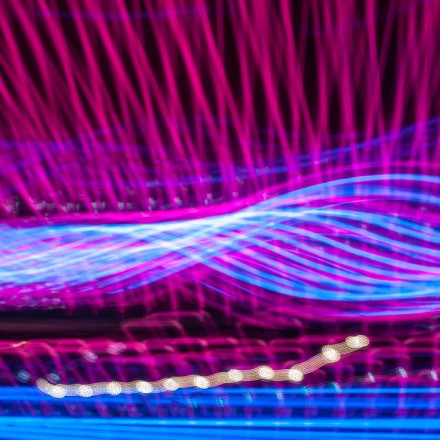 Quanta is a subset of the life-time Lumen series that I started in 2010. My ultimate aim is to mediate the properties of light via photography.

The abstract photographs shown here were created using long exposures of light in a fairground in Southern France. The images were all taken at night:

“…even the purest light, lacking the robe of darkness, would be without expression”.

Choreographed camera movements recorded the energy of moving light. While wandering around reacting to light and choreographing camera movements during long exposures I lost track of the activity around me and felt like I was dancing with light. The experience was immersive. There was a mixture of both planning and spontaneity. 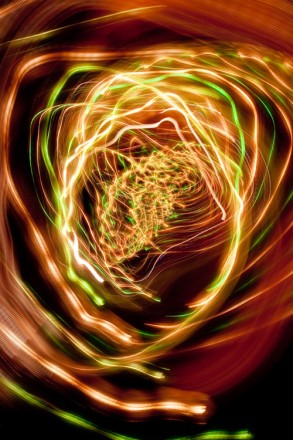 Moholy-Nagy’s earlier vision was that of an orchestrated painting with light:

“The work of the future lies with the light engineer who is collecting the elements of a genuine creation.

…just as one paints with brush and pigment, in recent times one could have “painted” direct with light, transforming two-dimensional painted surfaces into light architecture.

I wanted a… light-symphony which follows exactly the composer’s score.”

Quanta involved a more direct and spontaneous orchestration involving a choreographed recording of variations in the intensity, chroma, hue, line, movement, texture and depth of light. 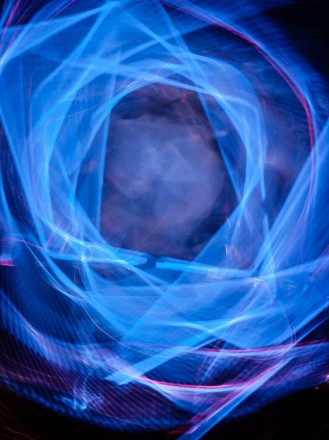 Continuous experimentation is the engine of the creative process. In the words of

Both staged and found light patterns are equally important to me. Unpredicted moments where light reveals itself are gifts of grace.

My basic approach is to keep focused on one area, observe different aspects and look deeper. I never try to force anything: what I love defines the style.

Vision usually precedes execution: imagination is primary but focused discipline, planning and craft skills are vital to translate a latent image into a real one. The key priority is always attention to interpreting light.

These Quanta images were very intuitive and instantaneous: vision blurred into execution. I was at play with light and instinctively knew in advance which images would remain. 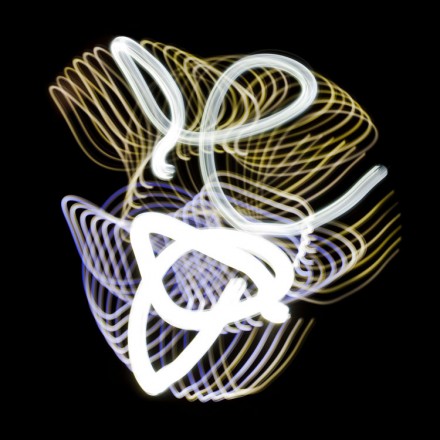 The light patterns are also metaphors pointing to events beyond their creation. 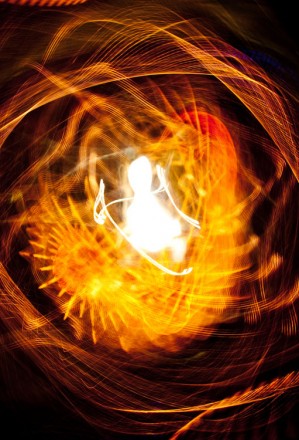 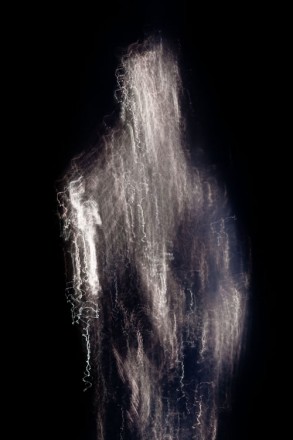 A key aspect is transformation. The emphasis is not on the figures/objects but on light and its modulation:

“Objects are chosen for their light-modulating characteristic; their reality and significance disappear.” 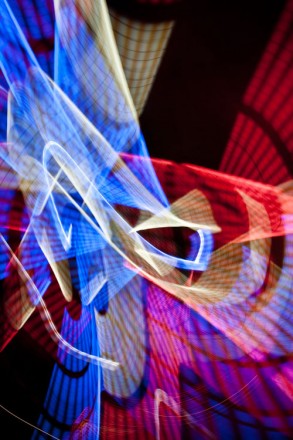 The formal qualities unique to photography as a medium are vitally important. My aim is not simply to document reality but to reveal hidden aspects of the world, especially of light and photography. By using these unique qualities, the referential / indexical aspects of photography are now so abstracted that the images no longer convey as-seen reality.

When the “object” is light itself, abstraction is pushed beyond the photographic transformation observed by Barbara Savedoff :

Barbara Savedoff, Documentary Authority And The Art Of Photography. 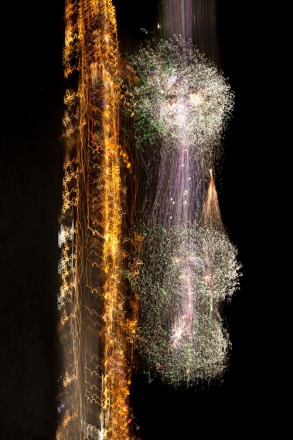 A constant theme in my work is a quest for simplicity and minimalism. “If the doors of perception were cleansed every thing would appear to man as it is: infinite.” 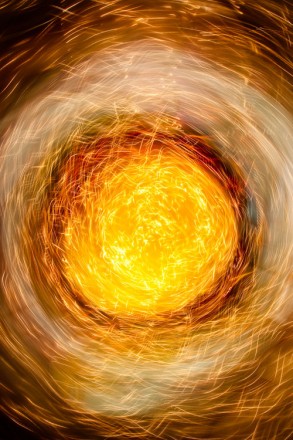 Abstraction involves going beyond precise recording of seen objects – from seen to unseen, from objective to subjective. It is a highly selective and partial disclosure of reality. Abstraction also encourages the viewer to participate in creating their own meanings. As Aaron Siskind observed:

“When I make a photograph I want it to be an altogether new object, complete and self-contained, whose basic condition is order…

The object has entered the picture, in a sense; it has been photographed directly. But it is often unrecognizable; for it has been removed from its usual context, disassociated from its customary neighbors and forced into new relationships.”

“… novel seeing, a vision of things that have not been seen – investigative or undisclosed photography rather than abstract photography. At its most extreme, it offers objects defined by their concrete, material existence, referring to nothing outside themselves.”

There are several methods of photographic abstraction involved in Quanta such as the selective framing of reality and time exposures revealing unseen worlds within reality. Influences include Goethe, books on cosmology and science, art films and theatre (especially the lighting), abstract photography and movements in paintings ranging from Renaissance to Abstract Expressionism. I am fascinated by the work of artists such as James Turrell who create environments in which the qualities and properties of light are replicated and enhanced in front of the viewer. This is revelatory:

“Light is not so much something that reveals, as it is itself the revelation.” An entire series of light-related experiments is planned for the future: hopefully images from the different series will show cohesion.

My final advice is to keep focused on one main area, stay open to all the possibilities and always keep going.

The greatest inspiration for photographers is the inexhaustible reality of light surrounding us.

We just have to look deeper.

Next article »
Unseeing, by Julianne Nash
1 trackback on “Quanta, by Michael Taylor”