Frozen in time, by Urban Travel 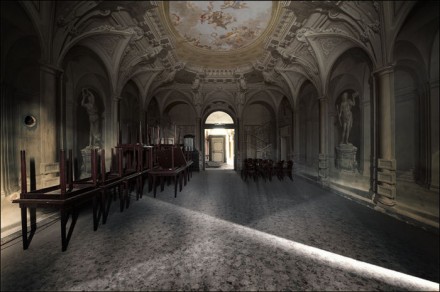 Text and photographs by Urban Travel.

As a child I already wondered about the decayed factories and lost places. They appeared to me in a flash through the dirty car window while sitting in the back of my parents car. Dark brown walls past by in a flash, behind it huge buildings, broken windows and smokestacks which stopped vomiting their poisoned air. I always kept wondering what to expect on the other side of these walls.

I always kept wondering, it was a curiosity which kept burning the rest of my life.

In the age of 39 i started to photograph these places. First every place was excited and i found every abandonment as beautiful as the other, but soon i started to search to the really hidden beauties, the real forgotten places. In the meantime i photographed 350 places, not all that special and beautiful, but all with their own atmosphere. The last year i focused on the ‘good stuff’, the really great locations and unknown heritage. Huge factories, castles, cinema’s, as long it is untouched i want to see it. For that i travel most of Europe, just to explore and photograph these forgotten places. 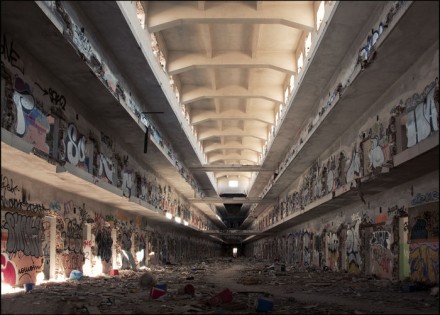 It had to be a visit with a local, but due to the fact that he canceled I decided to go alone. Goal: The Carabanchel prison, one of the most sinister prisons in Europe and abandoned since 1999. Not really abandoned, after the prisoners left it became a place for the homeless people, the junkies and gypsies who lived in and around the buildings. And not really a place to walk around alone, not speaking the language and carrying expensive camera equipment. It didn’t took long until i was notices.

A huge concrete rock was thrown and landed just 1 meter behind me. Not really known what i should do I decided to hide in one of the cells. While 3 people ran down the stairs and start looking for me and the equipment, I shivered and just waited. After a long 30 minutes I finally left my hiding spot, and just went out as soon was possible, taking some quick shots while going to the exit. 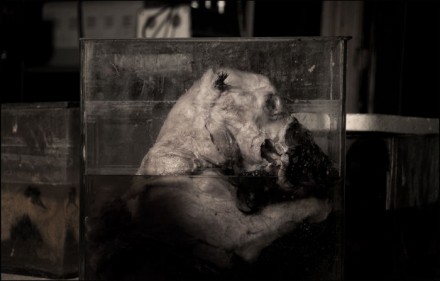 As soon as i lowered myself in the grill in the pavement it felt different. It was dark, it felt cold and wet, and there was silence. Slowly moving further in the dark my eyes got used to the light. In the soft light which felt through the grill i noticed jars. Hundreds of them. Jars with animals, parts of animals. Stocked here a long time ago, when it still was in use as a veterinary school. Strange they left it behind.

Early in the morning. Tired of a long trip, just to see this one. While we sit on the porch the dark silhouette looks even more impressive then this castle do by daylight. Just before sunrise we find our way in. A dangerous climb down in one of the rooms which should give us entrance to the rest of the building. The first door already seems closes. Disappointing because we thought it has been locked. Fact was that the ceiling from the room behind it was collapsed very recently and blocked the door. After some pressure the door moves and carefully we climb in over the beams and stones, and we find ourselves inside a medieval Spanish castle. An armor suite is rusting away besides a huge Gothic table. Religious statues just left behind, looking sad as if they know it. What intrigues us is why it is left this way? We still don’t know. 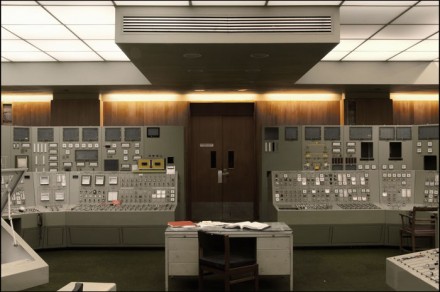 4 AM in the morning. Very early. We had an appointment with a local photographer on a parking place in the neighborhood. As suspicious as a meeting can be at that time and place, the rest is even more. Our goal was an abandoned and mothballed power-plant. Abandoned due to the fact that it was oil-heated and finished just during the oil-crisis. Mothballed because they kept is as a backup, which also mean that it was guarded. 24/7 by CCTV and security on site.

Our Scottish guide knew the way, and because my Scottish is not that good it was not easy to understood everything he told, but soon I learned that Ai meant Yes, so as long he said Ai, I guessed all went well.

From the parking place it was a 15 minutes walk through bushes, wet and muddy ground and having a hard time to keep the branches out of our faces. After finding a hole in the fence we found ourselves on the guarded terrain, and after an Ai we ran after our guide towards the power-plant. As silent as we could we started climbing the stairs, higher and higher. Looking down we just had sight into the cabin with the guards, still drinking their coffee, unknown of what was going on outside. After some more stairs we could enter the building through a bended steel plate. Finally! After a few hallways and some more stairs we entered the center of it: an untouched 70’s control room. Thats what we did it for!

After 13 hours inside, shooting photo’s and waiting on the darkness we left unseen as we were never there. 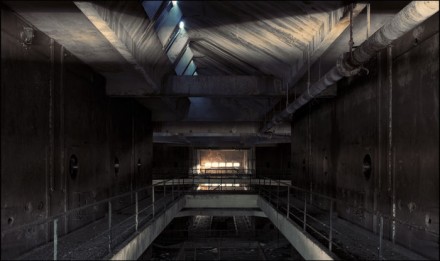 After a few hours drive it was already dark when we arrived at our hotel. Too early to go to sleep we decided that we do a short visit to the location we wanted to go the next day. A former whine warehouse, standing in one of the old parts of the port. In the dark it doesn’t seems to be that special, and besides that it wasn’t a cosy area to walk around that hour of the day. A dark car with dark tinted windows drove slowly by a couple of times, probably wondering what we were up to, while we were thinking the same about that car. Hearing stories of this building as a place to sleep for the addicted and homeless people of the city, we marked the entrance to see if our mark was still there the next day, so we knew it would be safe to go in or not. Next day it still was there, so we get in without the risk of being surprised by someone. Inside it was clear the building was used for a long time by as well people who slept here and the many rats and pigeons. Without doubt it was the most filthiest building ever.

5 AM. The city is awakening. In the bakery the light is already on. Through the open door you can smell the fresh baked bread. More lights are turned on. People are started to go to work and it doesn’t take long before the whole street is one traffic jam. A bus blows its horn, a man quickly jumped on the pavement raising his fist. The city is awake.

Years of exhausts turned the buildings in one big gray block, but for the one who pays attention every building has its own face, its own design. Behind one of this facades its quit and empty. For decades. No one seems to notice, no one seems to wonder what it was. It became on with the city. 400 years of history are hidden behind these gray walls. 400 years of busy businessman, dealing in whatever was bought and sold through these years.