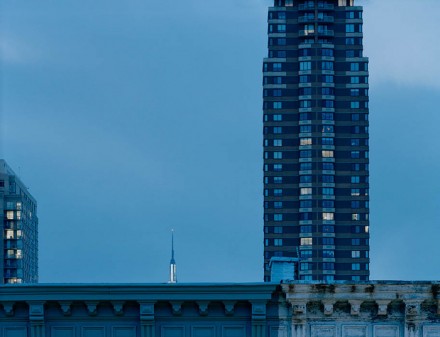 Text and photographs by Lajos Geenen.

Since moving to New York City from Amsterdam 6 years ago, I have seen my neighborhood change in a dramatic way.

At the time of my move, I chose to live in Long Island City, a rough industrial area, which is just across the East River from 42nd Street in Manhattan. In the beginning, it was a quiet neighborhood with an almost village-like feel to it. The vast empty spaces and unused land were an integral part of this great neighborhood, setting a rough and desolate stage for the skyline of New York. 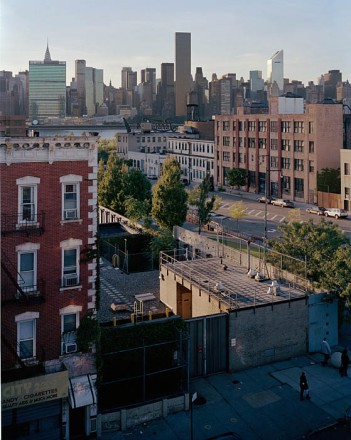 But slowly these spaces were filled up.  New glass and steel towers were going up along the riverfront, and old buildings further inland were being torn down to make room for new condominiums. In addition to these new buildings, a new, palpable tension was also going up in the neighborhood.

Tension between old-timers and new residents was growing. Partly because the new construction was only accessible to the (perceived) wealthy newcomers, but also because the old residents felt like they were being enclosed and trapped by these new buildings.  Not only did it change their neighborhood physically, but it made them feel like strangers in the place where most of them grew up. The obstruction of dearly held views became a visual manifestation of these feelings. 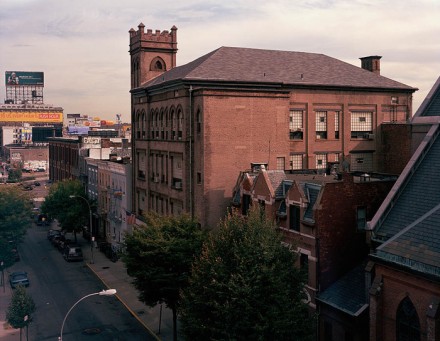 I have mixed feelings when I encounter these embittered neighbors because I sympathize with the old timers even though I’m one of the newer ones. I am probably perceived as an outsider by them, even though I’ve been here since before the new building frenzy started. Living in one of the old walk-up buildings makes it a little better in their eyes, but they still consider you “not one of us.”

Over time, they slowly warmed up to me. Dragging my Cambo 4×5 camera around the neighborhood was a recognizable sight, and I became less of an outsider. Most of the old timers who have lived here all their lives could remember that when they were young, pictures were taken with a camera like this. So a connection was formed, in part through just seeing me around the neighborhood, and being open and friendly. 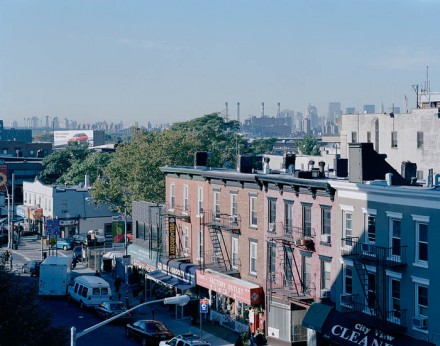 The main complaint of the old timers is that they perceive the new “tower” people as arrogant (even though they almost never interact with them). But when you question them why they felt that way, there was never a clear answer. And it often ended up with a comment about how “they” took all the parking spaces.

Since parking is free in some parts of the neighborhood, this was a hot button issue.  I was often told, when I pointed out that free street parking was for everyone, that if they could afford to live in the towers, they should also pay for parking in the garages that were built at the same time and were sitting half-empty. 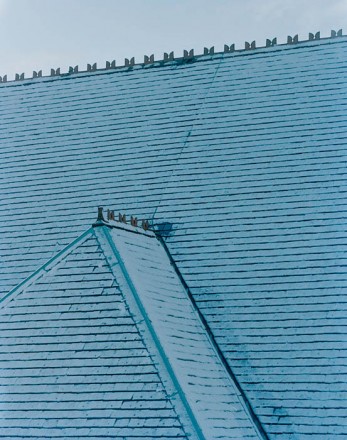 Long Island City continues to change. New people keep moving in, and sometimes you catch yourself feeling like the old crew with mixed feelings about it. The feeling is less directed toward the people moving in, it has more to do with what it will do to the neighborhood. People like the small stores and artist community, but as a result of all these new people moving in, rents are going up and the people who made the neighborhood cool are forced to move away.

And because people don’t interact, both groups have a distorted view of “the other” and make gross assumptions. I’ve been playing soccer with a lot of people who live in the new buildings, as well as with people who have lived here all their lives, and I know that the newcomers are not all rich Wall Street bankers. Many of them live with roommates or with their family in a one bedroom. Hardly the picture of wealth. 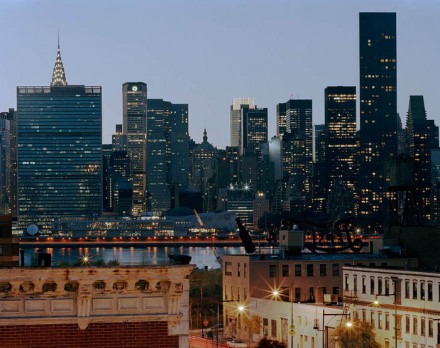 I was thinking of a way to visualize this phenomenon and at the same time trying to asses how I personally related to all this. Since I am an interloper myself, I realized it was disingenuous to pretend I was on the old timers side (although I could understand their feelings) but I certainly did not identify with the new crowd either.

I resisted the temptation to photograph the “old timers” in run-down parts of the area, or for that matter shooting them against the shiny new buildings to create a feeling of “alienation.”
Instead, I wanted to make this a very personal story and stay away from general statements. I wanted to concentrate on how this was affecting me directly. 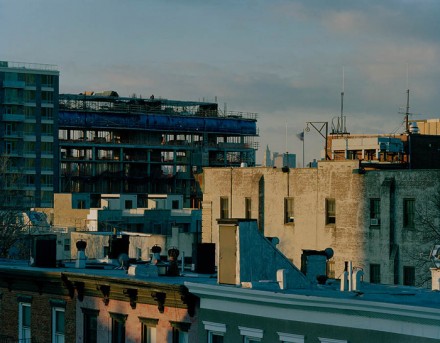 So I photographed my own perspective and how it was affected by all the new construction.

In the beginning I wanted to document how the view was at the moment before the big building frenzy took over the neighborhood. And since then, every time I felt a major change was about to take place.

It felt like I was standing guard to “catch” the action as it was unfolding, almost as a futile attempt to stop time literally, by taking a photograph. 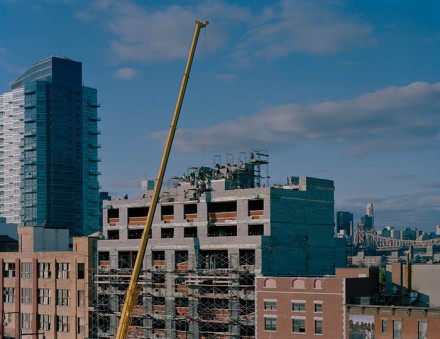 After I started the project, I read a history of the neighborhood. I learned that the church across the street from my building had originally been built in 1893. It was destroyed in a huge fire and was immediately rebuilt to open again in October, 1894. Interestingly, the fact that the view from my building is partially blocked by this church has never bothered me much. It certainly didn’t bother me as much as the new buildings that are being built and altering my existing views.

So why are we less irritated with the buildings that block our views that were already there before us?  The new ones we witness going up are the evil ones, but those old buildings that were blocking someone else’s view when first constructed are somehow okay. 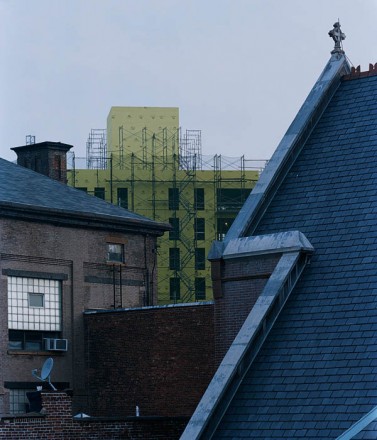 When we’re born in a particular place, or grow up there, or move to it and become used to it, we consider that how we see it is the baseline for how it should be. We ignore or remain ignorant of all the changes that came before us, and feel almost entitled to have the situation “frozen in time” until we move somewhere else. And then the whole cycle starts all over again.

By documenting the slow but certain demise of these views, or perceptions thereof, I’m visualizing my own relationship to this problem. As both a newcomer and someone who decided to live in an old building instead of the new towers, I was trying to relate to the feeling of suffocation that was described to me by some older residents, but was having a hard time doing so.  Maybe it was the location of my fourth floor walkup apartment, or the lack of fear of being pushed out of the neighborhood, but it could also be a cultural-generational issue. 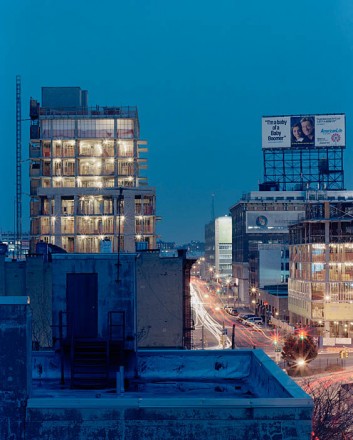 If you have lived somewhere all your life with no knowledge of anywhere else, or feel less mobile for financial reasons, it might be more difficult to be flexible and accept change. It is then understandable to feel isolation and suffocation, of feeling the aggression of being slowly closed in upon with nowhere to go but leave the neighborhood.

Precincts refers to the sections of the neighborhood that have changed so much over time, as well as the “enclosed space” that these images were shot from. Since all images have a similar high perspective and subtle visual clues of “overlap”, there is a suggestion that the series may have been taken from one apartment. 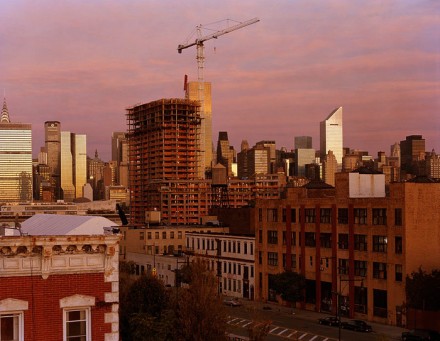 In an ironic twist, when this project came close to being finished, I was told by my “old timer” landlord that he wanted my apartment for his son, and that I had to move out in a month.  I ended up in one of the new buildings that was blocking my view.

Soon I will see my old neighborhood from a new perspective, high above it all, and hopefully will never be blocked by new construction, although that’s a promise nobody can give anyone here in New York City. 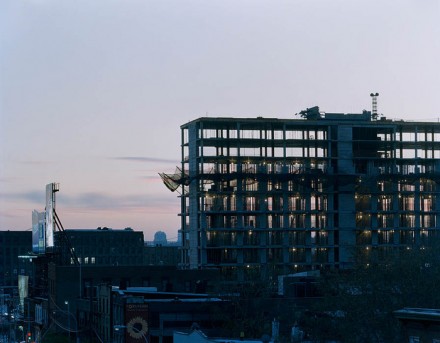 «Previous article
"Ein nichtort" or the fairy tail about the galoshes of fortune - an insightview, by Evi Lemberger