In search of the Common Place, by Eoin O Conaill 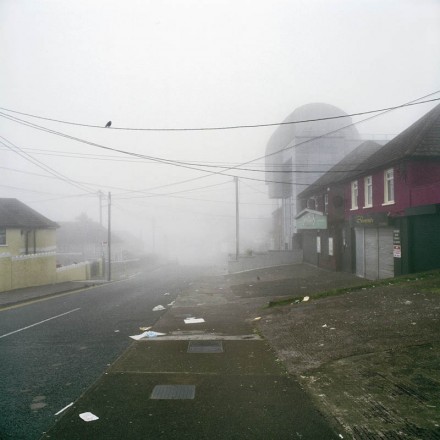 As an outline to my style of work and working I can explain how my attraction to photographing the everyday landscape began. I did not have a strong interest in photography from a young age and in truth happened upon a course in photography and continued from this course to a degree and to a point where I held a qualification and a strong idea of what I wanted to say but was unsure how to say it. I wanted to look at the landscape around me, to explore my own country and in many ways to try to gain a better understanding of what it is to be Irish and where I fit into all of this. I had always been drawn to photography and art that gave me space to interpret images in my own way, work that did not have all the answers but had plenty of questions. A phrase by Winogrand I heard recently describes this very well “nothing is as mysterious as a fact clearly described”. The likes of Walker Evans and Stephen Shore and an Irish painter Martin Gale presented scenes with a strong sense of intrigue that drew you in to try to interpret what the artist was saying. Very direct composition yet quiet, and crossing the lines between art, documentary and archive, these works offered a way for me to examine the immediate world around me and to grasp how the collective identity of place can be explored through photography. 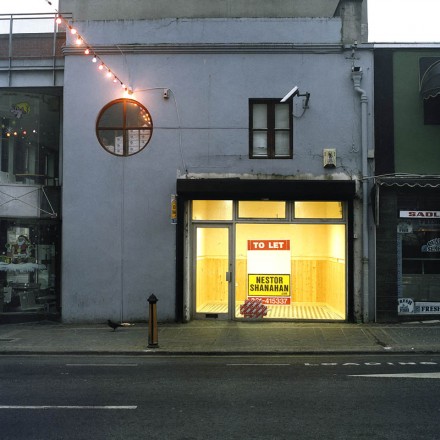 The need to photograph around my home country Ireland came about a number of years after finishing my studies. My job meant that I traveled around my native city Dublin for hours on end – sitting in traffic on wet evening or early winter mornings. These moments of being stuck in in-between places forced me to look around at the everyday spaces we inhabit. The feeling and the ambiance – those dull yet intense moments when you glimpse something special in a place you have passed a thousand times. The landscape around us encapsulates history in the physical form and can be viewed in many different ways, a simple street scene on the outskirts of Dublin holds so many different meanings and histories when viewed by an elderly resident of the area, a young person newly arrived in the area or a tourist passing through. I am constantly trying to grasp what is of interest in a scene, looking deeper to understand the layers within the landscape, where architecture, history, politics, culture and personality come together. I had also not seen the reality of Irish weather incorporated within contemporary Irish photography and I wanted to be true to this aspect of living on an island facing the Atlantic Ocean where rain and mist come to dominate at certain times of the year. 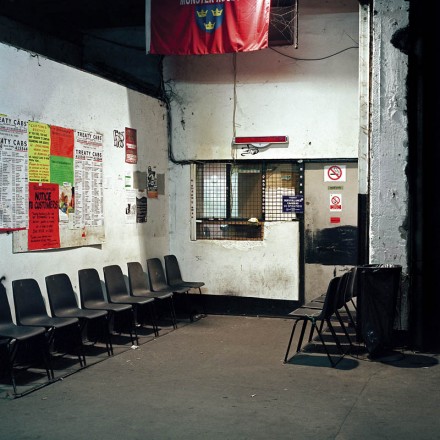 This project “Common Place” is about photographing the places we pass daily, the estates and side streets that we often take no notice of but that contain all the information necessary to highlight the political and social issues that are prevalent in the country. This project was made in 2006-2007 during the height of the economic boom where prosperity had transformed many of the notions that were seen as “Irish” and certainly the perception of ourselves as a nation and of this country internationally was changing. It felt almost like a re branding exercise was in motion, this idea of the modern cosmopolitan country of landmark developments were being pushed to the fore. I wanted to highlight the distance I believed existed between the reality of our everyday existence and the stereotype of place, recognizing the large changes occurring both culturally, socially and physically without making this change the sole focus of the work. This project therefore addresses the recurring enigma of trying to document and represent social and physical change without the obvious visual pointers but looking instead to the everyday landscape where buildings wait to be transformed, where subtle changes hint at what has passed and what is to come, where the optimism and base reality of human existance are witnessed as a people survive, possibly strive and generally get by. 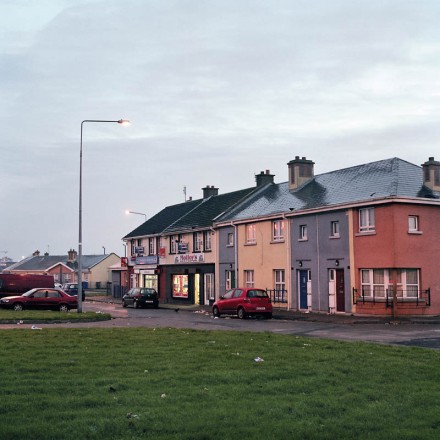 This is a shot taken on the edge of a housing estate in the Moyross area of Limerick city. Molloy’s shows a typical housing estate and is a type of vernacular architecture that can be witnessed on the outskirts of many towns and cities throughout Ireland. This image demonstrates many of the points I am making in my work. In the left middle distance the small detail of a big new landmark office development can be seen on the skyline. However these are isolated areas marked for development and the rest of the country remains very much the same where there is a gulf between what is happening in isolated areas and what is happening everywhere else is evident. Development on the ground show a more subtle addition and layering of the architecture where a few new houses have been attached to the older structures – the constant layering of the built environment where an extension is built here or a new house there will form the legacy to the now distant years of prosperity in the general landscape. 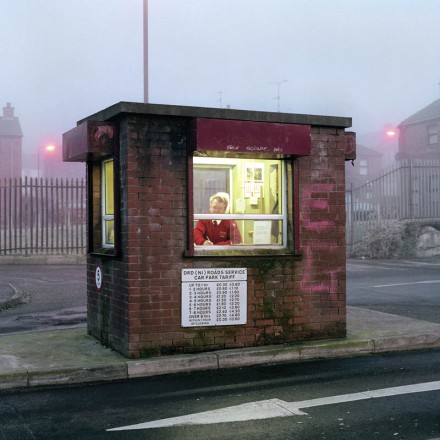 The image Car Park Attendant, Derry, highlights the contradiction inherent within the landscape where the subtle shift can be witness as the local is being overtaken by the global. Where the attendant sits in his hut, not yet replaced by the smart-card speed of the newer multi-story car-parks and as in Molloys, the local small privately owned shops have not yet been swallowed by the large shop multiples and not yet been re branded as a Spar, Centra or Mace – soon to happen. Despite the rapid sweep of global processes and pressures, the local and human still holds some sway. 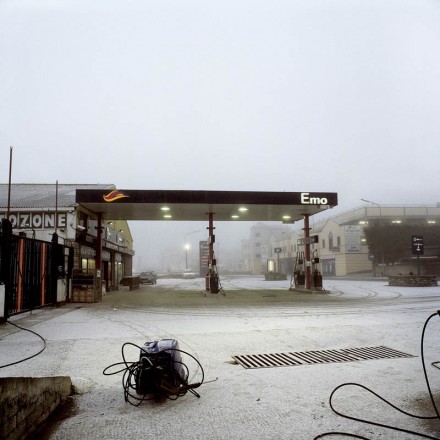 As with all of my works, I find that I work best as an explorer searching for landscapes that are visually interesting and speak of a place and time. I don’t believe it is possible to pin point beforehand the photograph or project you want to make or that it is possible to go out with a direct point or message that you hope to visualize. For me the phrase “ ideas emerge through discovery” is important as you must look deeply and photograph heavily to find in the landscape what is important to the body of photographs you are working on. For example this work began as a much wider and more open exploration of the landscape of Ireland that gradually emerged into the project Common Place. The aim was very much that exploration, a way for me to look at the landscape that I am so familiar with to try to figure my place within it – to discover my view of it. Like any creative fields, you begin with an idea that will evolve and both expand and contract during the course of the project, finishing at the point where the final edit takes place. 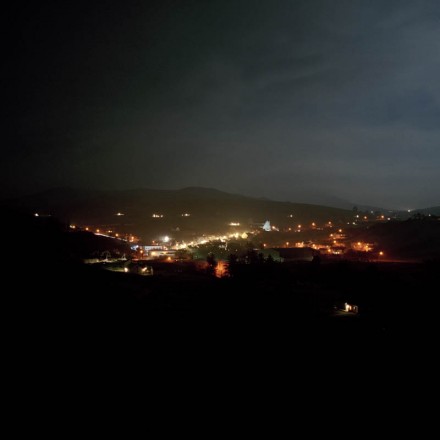 A recent commission on a small Island in southern Ireland has brought me away from the more general views witnessed in “Common Place” to a more personal, more challenging piece of work in certain ways. Again the focus is firmly on the everyday space and to the subtle views of where people live, work and spend time but this project takes on a more inclusive and personal viewpoint where I am trying to highlight what factors combine to create a community and an identity of place.

This work will be exhibited in the coming months and a larger selection of the work is included on my website www.eoinoconaill.com. 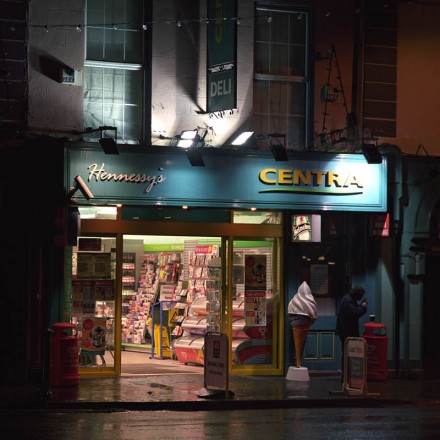 Next article »
Seeking The Elemental, by Jeff Greer
2 comments on “In search of the Common Place, by Eoin O Conaill”