By the Lake, by Birgit Püve 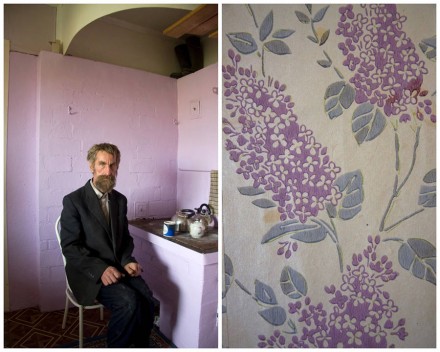 Text and photographs by Birgit Püve.

On 5th of November 2001, it was time to say good-bye to the little village by the lake that divides Estonia from Russia. The storm had ended, the roads were empty. Outside there was lack of daylight already in the morning. The sky was down. The darkest season had begun.

But it felt hard to leave.

There is no land without people and their personalities that make the land – so of course I wished I could stay longer because of the people. I knew Tamara and her husband and their son only for a week – my hosts in the village – but they did all they could for a stranger to feel at home. They were shopkeepers, and I – their ‘shop-girl’. When I said I wanted to write a newspaper article about the life in the poorest countryside district of Estonia ‘through the eyes of a shop-girl’, they came along with the idea the very first moment I met them. We made an agreement that I would start working at the shop on the same day. They not only kindly ‘offered’ me a job for a week – insight to the village’s life – but their home as well.

So I began to work by the lake… 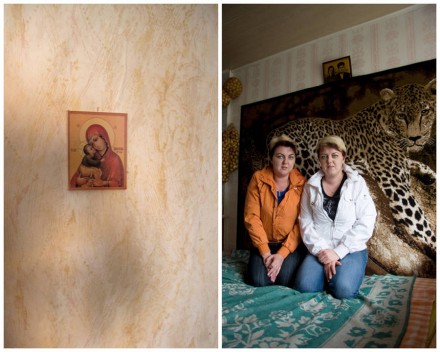 When the Soviet Union collapsed – in the beginning of the 90s – the borderland of Estonia (former republic of the USSR) and Russia was neglected, until it turned into periphery. The big Lake Peipus separates two shores that are now politically different worlds: one – part of the European Union, the other belongs to the Russian Federation. Both sides lie far away from big cities and capitals. Closing of the borders cut off the strong ties between the people of two sides, who defined themselves by the lake, not by their nationality. All this even deepened the status of borderland.

Now old people sleep alone in their beds under the icons in the middle of luscious wallpapers, patterns that remind the beautiful past. The children leave. 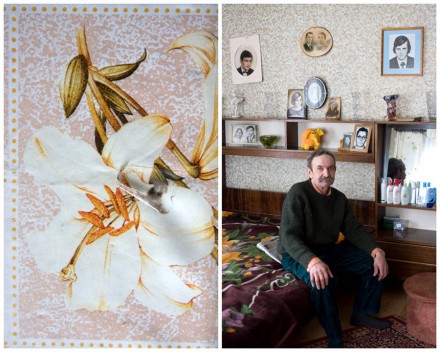 Since 2001, I haven’t left the area in my mind. I found the region – Prichudie as it is called, derivation from the Russian name for the lake – really beautiful in a way, but the signs of fading were visible, too. Many old people have gone ‘to the other side’ since I began to visit the region. But the fading was not just physical – it was the soul of the land that was getting weaker as well.

When I started the series ‘By The Lake’ two years ago, I was drawn to the closed community that lives in the region. Although I didn’t concentrate on the representatives of Russian Orthodox Old Believers, most of the people portrayed in the series are part of this community. Russian Old Believers, who now live in the little villages that run by the shore of the lake like a big snake – from the North to the South – are the descendants of Old Believers, who escaped to Estonia from deep Russia already in the 17th–18th century. Suddenly, their clerical traditions were forbidden and Patriarch Nikon’s church reforms made it impossible for them to continue their deeply religious life in Russia. Instead of compliance or adaptation, they decided not to sacrify their dignity, but to leave. Their homes and houses of worship were burnt. Even in Estonia they lived in threat long after the reforms, even in the beginning of the 19th century. 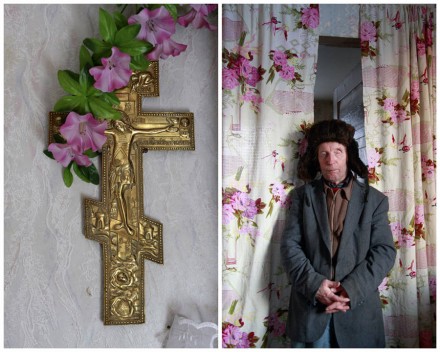 Estonian Old Believers’ community is known to be very friendly, but usually they don’t let strangers in. Old texts say they even won’t share their dishes with strangers. They still read old clerical church books, use difficult Old Russian texts and the Julian calendar as they used to. Some foreigners have compared them to the Amish in the United States, but it is not an accurate assertion. The only thing they have in common is perhaps their proud self-consciousness. It seems as if they do not need the world outside to exist – they need the lake, but for deeper identification, they need no other people by themselves.

It is true that the proud old community is decreasing fast, but struggling hard to survive. Water still gives freedom of thought and faith support, but there are few new seeds of the land. Children are not that keen on ancient traditions any more, the rate of unemployment is one of the highest in the country and young people keep moving away (Most Europeans do not know that in Estonia there is still the biggest concentration of traditional Old Believers living on such a small area – in these villages – in the world). 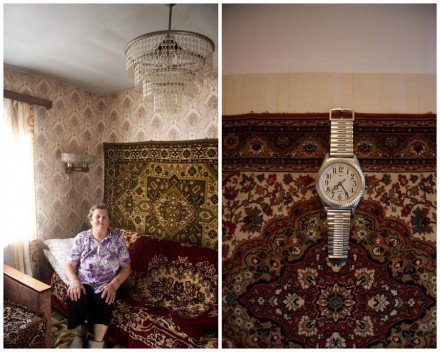 As I got acquainted to the locals and visited many of them not only once, I began to pay more attention to the interiors. Everything referred to the past and their personal or general history. Walls, patterns, photos of ancestors – everything was connected to private memories. As their identity is so remarkably associated to the old times, I sometimes feel they live more for the past than for the future. Perhaps contradiction evokes an unreal, longing look in their eyes? Dreams lie silently, waiting to be awoken – before life disappears.

There is something lyrical about their private environments. Therefore, parts of my diptychs concentrate on the past.

My aim is to show the silence and dignity of the people of this culturally unique and rich part of the European Union, on forgotten shores, the vanishing land. 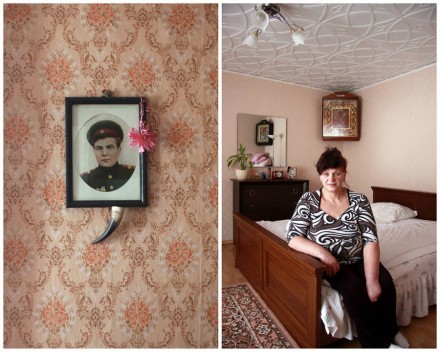 Winter, 2011. We went back to Varnya to visit Fyodor again to bring him the photos I made of him last year. Fyodor had been in the hospital (having gone through an unfortunate traffic accident) – but was recovering now, lying in his bed. He had made slow steps towards getting better, as his sister said. But I didn’t see him this time…

I take it as a generous gesture – to be guest in these houses of joy and sorrow. When you meet the same people again, you get involved with them and are personally connected. Yes, there was a time once I got so involved I even found fleas in my clothes being back at home after photographing Bim, the dog of Alexander. From a distance – an amusing fact to remember, though.

Another time I had to escape. The quietness of the graveyard of Lohusuu was broken by a crazy local young man who had followed me in silence. I didn’t notice him until he began to make loud weird noises just right behind me… I jumped up and ran as fast as I could! 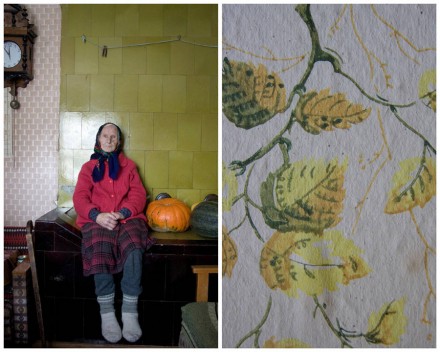 Although they live mostly rural life, I have to admit their homes are extremely clean and things arranged in almost scientific order. As if nobody had touched them for a long time… Since many of them live in their wooden houses alone (the loneliness is sometimes the consequences of the angry unpredictable water – many women have lost their husband to the lake), it sometimes feels as if we both were guests – as though life had left…

For now, some of the older people portrayed in the series have already gone. Anna (above) left only some months after I visited her on her 100th jubilee. Former Father of the church, Batyushka Ambrosi, left just before he would have turned 100. Even Bim, the man’s best friend (on the back of Alexander), has gone…

But Stepanida, 103, is alive. And many others I haven’t met yet.

To write about them… it takes a book. 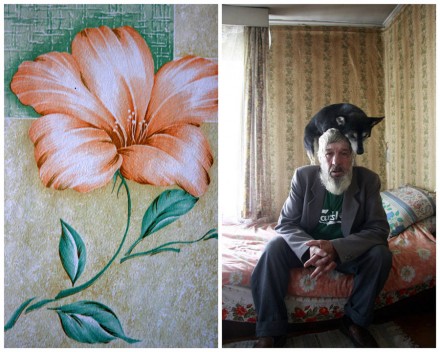 Next article »
Interview with Rona Chang
3 comments on “By the Lake, by Birgit Püve”