A dedication: to Urghyen and Ladakh, by Sankar Sridhar 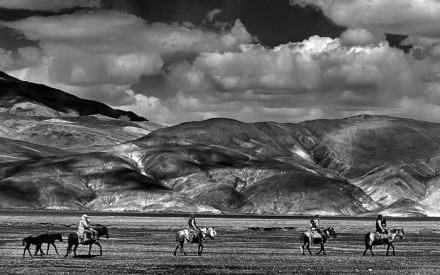 A Changpa family on the move. The tribe's movements are dictated by the season and women and children lead the migration while men follow while herding their sheep goat and yak. Since good quality Pashmina grows only in extreme cold, the nomads keep to altitudes of about 17,000 feet above sea level where, despite daytime temperatures of 40C, the glacial winds allow enough nip in the asir for the prized goats to grow their undercoat.
© Sankar Sridhar

Text and photographs by Sankar Sridhar.

The invitation to contribute to this blog has come at a time when a needling regret was just beginning to surface yet again. It has been nearly a six months since Urghyen passed away. I learnt about it when I had gone to visit him. I was told that his daughter, Nyima, has married and moved to her husband’s household. She’ll never walk the old trails again. To find her in the maze of mental maps criss-crossing the high-altitude desert that is the Changtang will be a mammoth task. I don’t know if I ever will get to meet her again. A relationship seven years in the making has ended, just like that.

Urghyen and, to a lesser degree, Nyima have been instrumental in helping me love Ladakh, the trans-Himalayan desert in the northern tip of India that shares its border with China. For a long time, it was only for Urghyen that I retraced my steps there, a zero-carbon-footprint journey necessitated by the roadlessness of the land he called home. He made me love him, and the Changtang, enough to throw away my job, twice, so I could live his life. 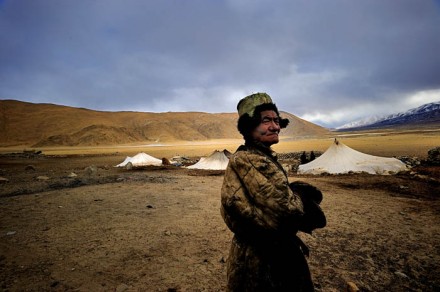 A recent picture of Urghyen, taken in January 2010.
© Sankar Sridhar

Yes, my journeys into this Himalayan shadowland have culminated in a book that has done well in the market. Yes, I had been visiting Ladakh for four years before meeting Urghyen and Nyima. Yes, I have made many journeys in Ladakh that have not involved meeting Urghyen. But truth be told, much more than images and the odd award, and books and travelogues in magazines, I thank Urghyen and Nyima for teaching me how to love a region written off time and again as desolate, harsh and lifeless.

If I have grown to be content with what I have even while living in the city, where flaunting material possessions comes second only to the necessity of acquiring them, it is in no small measure for Urghyen. And he must be given complete credit for instilling in me the courage, the faith even, to get up and going solo across Ladakh, a land of emptiness on such a grand scale that I have seen trekkers break down and cry because they have lost sight of their team behind a sand dune or a mountain pass. 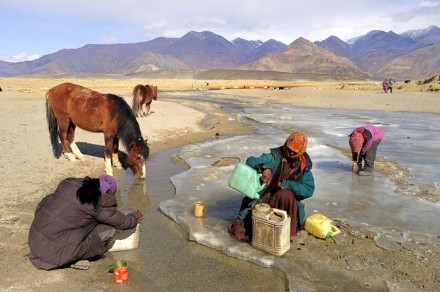 Winter on the Changtang. Even though the region receives very little snowfall, everything liquid freezes. Here Changpas and horse share the same water from a thawed pool in a frozen stream. The thumb rule among the tribe in such situations--never collect water from downstream.
© Sankar Sridhar

Urghyen was a Changpa, a nomad of Tibetan stock who moved into India’s Changtang plateau across the unmanned borders several decades ago. I met his daughter, Nyima, while heading to a roadhead to begin a trek. Upon my request, she had taken me to he home, and there, Urghyen invited me in and later accepted me as family. He even gave me a name — Thamo, which meant “The Thin One” in Ladakhi. Over time and many travels, much of which was with Urghyen and his flock, I began to realize what a wonderful a life they led. There will be many who would disagree — many Changpas, after all, have almost no access to modern medicine, schools are not much heard of, and they live in eternal migration with their sheep and goats and yaks, moving from one pasture to the next. Rain is a rarity in these places, and temperatures soar to 48C in summer and dip to -45C in winter. 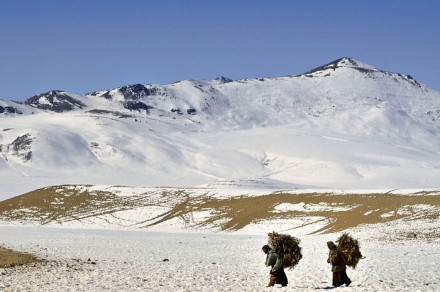 Survival is hard work in winter and entails walking as much as 20km a day to collect shrubs that can be used as fuel. The hearth in a Changpa rebo (yak-hair tent) burns through day and night during the seven months of winter. Droppings and wood make up the fuel sources.
© Sankar Sridhar

But Urghyen never found any reason to complain. He was bolted to the Changtang with firmness as astute as that of a believer. This land, where only the hardiest of species survived, was his home. And he loved it for the way it was, living true to the faith he followed — Buddhism. And he lived well, he said. “I breathe clean air, I have all the space I want. People in the city need all the medicines they can have because they are unhappy. Happy people stay healthy.” And as for education, he knew and had passed down to Nyima all the knowledge that was needed to survive in these high plains. He knew where water was to be found in each season. He knew prime grazing patches. He knew how to help a goat deliver a kid and keep them safe from predators. He knew where the 90kph winds would not rip apart his tent. He knew which clouds would bring rain and which would only raise false hopes. 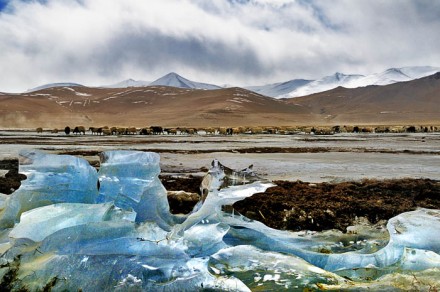 Water kicked up by gusty winds freeze midair on the Changtang during extreme cold snaps, when temperatures can fall more than 10C in seconds. If such cold snaps come frequently, Changpas head to lower altitudes (around 15,000feet above sea level), as seen in the picture, to ensure their livestock's survival.
© Sankar Sridhar

He was happy with his tent, his flock of pashmina sheep, and the traders to whom he would sell the fine undercoat that goes into making the much-sought-after fabric for shawls and stoles.

Being a nomad was a lifestyle he cherished, faults and all, quite like we do our ways of life. It was an acceptance, a happy acceptance, not a helpless surrender as many may point out. And in my time with him (on and off, much, much more than two years), he convinced me enough to respect his way of life rather than consider him an oddity because he lived in a manner far removed from what I was used to. Availability of water remains the single-most important prerequisite for the choice of a Changpa camping ground. Often, pastures don't come with it. Changpas make the most of the cool dawns to head out to graze their sheep and goats, sometimes over 8km one way.
© Sankar Sridhar

I don’t know when, but the Ladakh that began as only a mountain-grit region of peaks and altitude transformed into a living, breathing land, and I, a traveler without an agenda. Somewhere during my travels I let go of the map, the trekking trails, the urge to get to a place with a name by evening. There was no hurry, no destination to get to. I lived in the faith that when I ran out of rations, I’d find help. More often than not I did. Over time, like Urghyen, I feared not about getting lost, but about being found. In the past seven years, the only signs of humans, other than the Changpas, I have seen on my travels have been the litter mindless trekkers intent on bagging bragging rights have left behind. 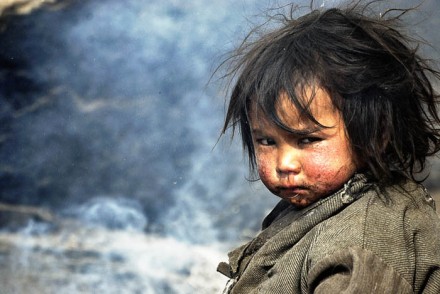 The vagaries of weather show on the face of three-year-old Trinley. The scorching sun, extreme cold and whiplashing winds, not to mention the singeing heat of the hearth, all conspire to lend the Changpa the weathered, wisened look at an early age.
© Sankar Sridhar

As the army has built more roads into its heart and magazines and newspapers have touted Ladakh as the ultimate adventure destination, so too has the level of litter increased along roads and trekking trails. Empty beer bottles, cola cans, polythene bags and a whole lot more crowds trekking routes today. Each time Urghyen came across another stash, his eyes would give away the hurt he felt at the defilement of his home.

Urghyen has seen, as have I, the sudden bureaucratic decision to demarcate part of the Changtang as a national reserve, off limits to the Changpas. The reason? Man-animal conflict. It was strange that in the entire range of the animals that inhabit Ladakh, they have dealt with the Changpas, and the Changpas with them, ever since either can remember. Urghyen had moved, but never understood how someone who might never have visited Ladakh decided the Changpas are doing the terrain more harm than good, while fuel-guzzling SUVs offroading on the same terrain caused no damage to the environment or wildlife. For a tribe that counts its wealth in heads of goats, every birth brings added anxiety. Here Lamho warms an orphaned kid with love even as she prepares lunch for her family.
© Sankar Sridhar

It was on a day when he was depressed that he asked me to take pictures of his people, his home, and show it to “my kind” in the city so they could learn to love the impressive and fragile land. When you love someone or something, he would say, you’d be willing to give up your life to protect it.

No newspaper or magazine would be very keen on recording the passing away of a nomad. And not many would spare space for personal emotions. Even without Urghyen, I find myself drawn to this part of the Himalayas, ploughing ever deeper and away from trekking trails to discover new landscapes that would have made even Urghyen stop a moment more and appreciate it. Yaks are the only animals truly suited to survival in the extreme temperatures. So much so, the Changpa drive the yak to higher altitudes even as winter sets it. The animals roam freely in herds and are rounded up again post winter.
© Sankar Sridhar

The images in this series are part of a collection that Urghyen has seen, and appreciated. There are some recent ones as well, which he might gaze upon now and smile. They are an attempt to set the community of the Changpas in context with their environment and lifestyles, through the seasons. Urghyen felt some images could make at least some people ponder on the frailty of the balance in the Himalayas and goad them to be better hikers and mountaineers. I, too, can only hope that the images that brought a smile on the face of Urghyen — a man as used to the majestic landscapes much as we are to our surroundings — will have the same effect on admirers of the mountains.

And to my friend Urghyen, a man who measured distances in hours and time by the length of his shadow, who knew neither blog nor internet nor computer, I say this: Thank you for the giving me the gift of lack of direction, the greatest possession I shall ever have on my forays into the abode of snow. 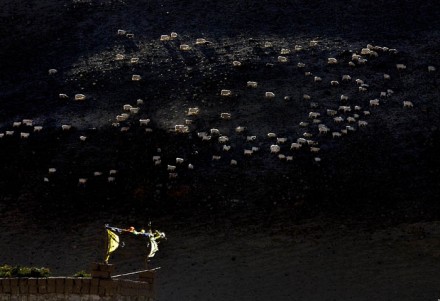 A flock grazing sheep take on the look of a celestial constellation on an evening on the Changtang. In the foreground is the roof of a house, complete with fluttering Buddhist prayer flags. More and more Changpa are embracing a sedentary life, egged on by the government which wants them to join the mainstream. As of 2008, only 1,500 families remained rooted to their traditional ways. Urghyen's was one of them.
© Sankar Sridhar