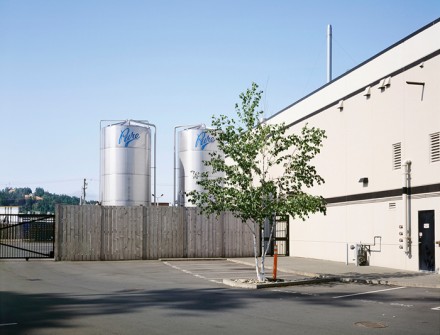 Text and photographs by David Pollock.

The pictures in this series entitled Sign, Symbol and Nature were made during 2008-2009 with a 4×5 view camera which I use for mainly two reasons. First, this type of camera slows the process down and reinforces my interest in the smaller details within the frame. Second, I want the subject matter, when reproduced as 61 x 76 or 81 x102 prints, to possess such high definition that they appear hyper-real. From the 4×5 transparencies generated, scans are done and I printed the final selections as pigment prints. The printing is an important and almost invisible part of the process and since the advent of digital printing, I have had more control of the image than ever before. 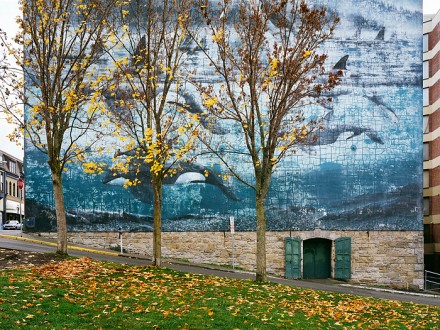 While my intention in this written piece is to provide some background to my thinking and processes, my words are not meant to explain away the images but rather to provide a portal to interact with them.

One of my aims is to provide the viewer with an experience that is not unlike simply looking. By layering from foreground to background and mostly using frontal lighting, deep space is accentuated and an emphasis is placed on the viewer’s relationship to the observed. In other words, I mean to situate the Self in a singular relationship, not only with the apparent fact of the world before us, but also our symbolic representations. 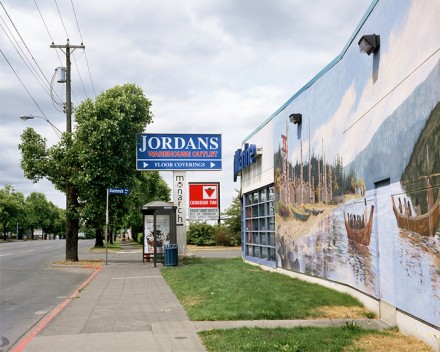 Below is a quote I recently read from the French writer and art critic Charles Baudelaire, a central figure in the birth of Modern art, written at the same time as the art and science of photography was first evolving:

These words fundamentally describe my practice of photography as a presentation of the everyday world whereby the decoding of cultural symbols is a means to a revelation of the otherwise invisible.

This project’s original subject matter was centered around a historically significant harbor near downtown Victoria, where I live, situated on Vancouver Island, off the west coast of Canada. Through this process, I began to consider this island’s ongoing transformation from primarily a resource-based economy to a tourist one. I started to make photographs that reflect this transition from the physical (resources) to the representational (tourism). I wanted these pictures to be of this place and its history so as to resonate beyond my point of view. 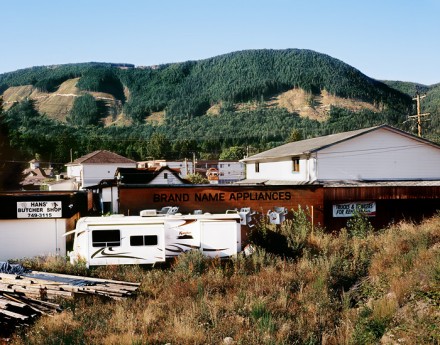 Prior to, and concurrent with, this project I read The Denial of Death by cultural anthropologist, Ernest Becker which changed my way of seeing. Many of my images are concerned with the symbolic representation of nature in a constructed landscape. Through my interpretation of Becker, I started to perceive our relationship to the natural world as one that is mediated by romantic ideals of beauty, harmony and purity and that our representations of nature can be seen as attempts to frame the chaos of the natural world within the markers of familiar cultural symbols. It is the garden, or cultured nature, that is often depicted in myth as Paradise. I see the story of Adam and Eve’s expulsion from the Garden of Eden as the fall from the protection of culture and the resulting consciousness of their own mortality. 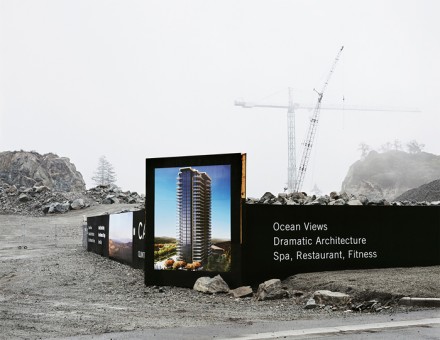 A central photograph of this series is Real Estate Sign, Langford.

This picture was the most immediate as it was composed with much less setup time than I usually need. It was early morning, overcast and misty, and I was only researching locations the weather was too inclement for picture-making. This photograph is a document, an embodiment of my emotional response and an opportunity to present ideas surrounding cultural perception along with symbolic associations. 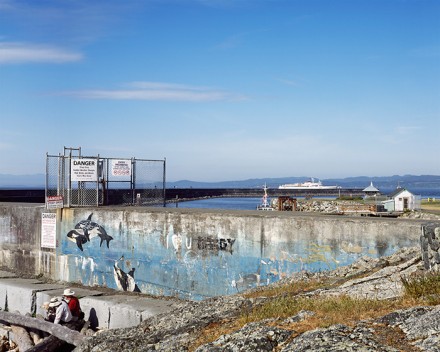 Like many of the pictures in this group, it is the scale of things that creates tension and ambiguity. The out-of-kilter size relationships in this picture, and the flat light and grey background contribute to the appearance of these subjects as objects in a studio tabletop setup. I am interested in these devices because through them we can recognize the artifice of these pictures and experience them not only as windows, but also as representations. The photograph within this photograph, as a mediator of our experience, represents the promise of a bright future complete with ocean views. 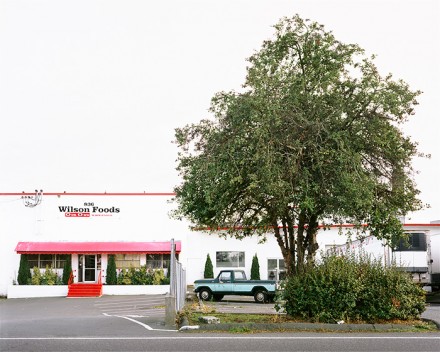 It is the photograph that dominates the landscape here as it the only colored and vibrant element. This, however, is the wasteland with the cross and the gallows in the distance. Even the words reveal a hidden meaning: a hierarchy of signs starting at the bottom with the body –Spa, Restaurant, Fitness–and our search for a perfect victory over death. Above that, the words wem>Dramatic Architecturew/em> which brings us to art and culture, and at the top, is the spiritual–Ocean Views. Sometimes photography, in all of its apparent factuality, can paradoxically show us evidence that things are often not all that they seem. 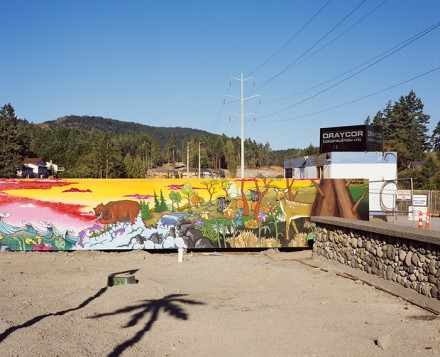 I used the following story in an artist’s talk to illustrate some of the content of the work. This story surrounds the image Theme Park, Langford.

I asked the workers at this theme park construction site to allow me to photograph within it. A young man, 18 years -old or so, who was working there approached me (as many people often do when I am in the field) and asked, “So, what are you photographing?” This is often a difficult question to answer, but I thought I had it well in hand with my response. “I am photographing a landscape, within a landscape.” This was indeed one of the aspects of what I was photographing. He went back to work and so did I. A little while later he came back and said, “So…landscape within a landscape …?” He wanted more. I thought to myself, “Okay, let’s get into it.” I talked about our idealization of nature, images of paradise, the gap between the real and the ideal, notions of beauty associated with nature, and that a major aspect of culture is that of an anxiety-reducing repression of our primal fear of death and decay associated with nature. After this he said, “You mean like how they wrap the electrical boxes in pictures of nature?” (Here in Victoria the city has beautified urban electrical boxes vinyl-wrapping them with photographs of nature scenes).-I said, “That’s what I’m talking about!” (I was happy and excited by that the connection had been made.) 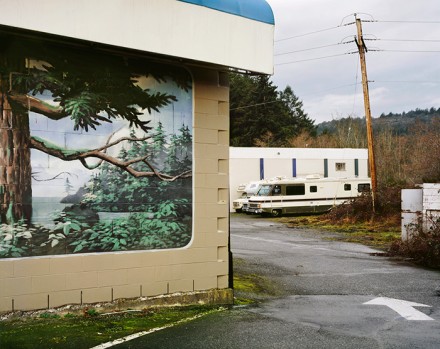 I made the picture and as I was packing up he ran up to me and asked, “Can you do me a favor?” I said, “Sure.” He said, “I’d like to take a picture of your camera.” I said, “A photographer should always be aware of the direction of the light source.” I turned the 4×5 camera around to face the sun that was at my back so that as he crouched down to photograph my camera with his digital point-and-shoot, the image I had just made would also appear within his frame behind my camera. I knew he would show this picture (which would include aspects of my picture) to his friends and that maybe he would talk about what we had discussed.

We are all tourists in the contemporary landscape. 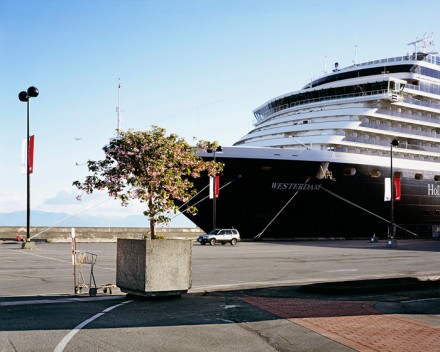 Next article »
Traces of a Lonely Crowd, by Manuel Vazquez
1 comment on “Sign, Symbol and Nature, by David Pollock”