Traces of a Lonely Crowd, by Manuel Vazquez 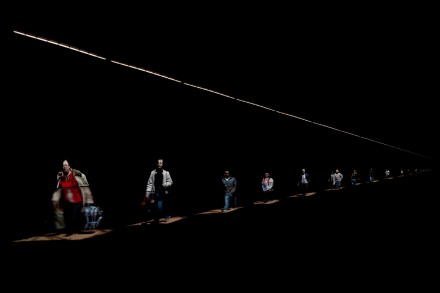 Text and photographs by Manuel Vazquez.

To dwell means to leave traces.

In a society full of prying eyes like ours, everyone can become both spectator and actor in the quotidian spectacle. With CCTV cameras scattered in every public space our dwelling leaves traces behind, stored as visual codes. Choreographed crowds transit the nameless global city in their daily commuting where self-absorbed pedestrians experience the paradox of public space; between anonymity and scrutiny. Non-places are where this paradox turns explicit and evident, and it is here where this project was undertaken with the intention of constructing imaginary urban landscapes that comment on our exposure to city life. 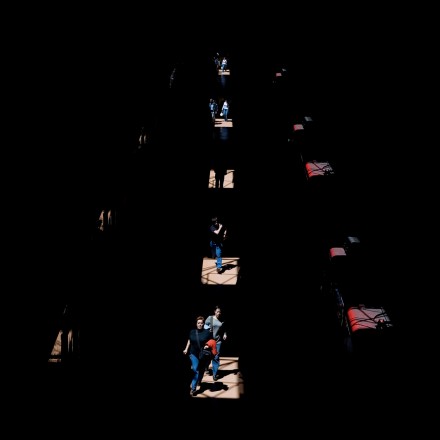 The project Traces places the spectator as a witness of a “spectacle”, built with visual traces, where the mechanization of movement and transport are the protagonist of places where loneliness and similarity are accentuated.

The overabundance of gazes and points of view makes the distinction between real and fiction increasingly tenuous, as this project unfolds in that foggy and blurry boundary. Ernst Bloch’s book called Traces published in 1930 was a mixture of tales, anecdotes and incidents gathered from different sources. He described it as “narrations of narrations”1, this led to storytelling where the boundary between fiction and reality may not be clear, or the truth and fiction may be both one2. 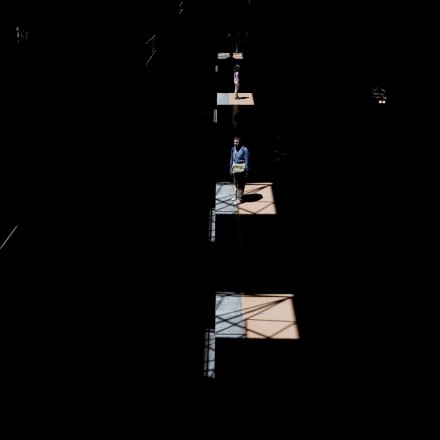 Traces’ intention was to alter the space and collapse the time at will, contrasting the documentary nature of photography searching for a different narrative than the “it has been” that has haunted photography since its early days. The author role is as much painter as photographer or editor. One could say that the images are the result of a transversal cut on the course of time, which at the end conveys better the expressive intentions, discourse, the essence of those places and the experience while undertaking this project.

“CCTV recording is in operation 24 hours”

To leave traces of our daily activities is more or less inevitable these days, and not only because of the omnipresence of the gaze of surveillance in public spaces but also because of the records of telephone calls, credit cards, electronic transactions, browsing the web, oyster cards, etc. 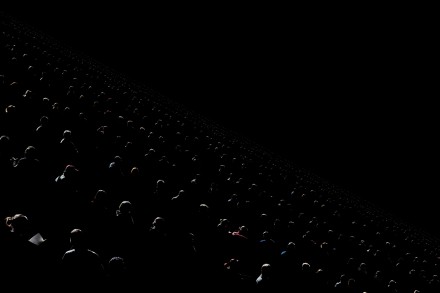 After the attacks on 9-11 in New York, on London’s public transport system and on Atocha train station in Madrid, fear has increased considerably; therefore surveillance has gotten into all corners of our private and public life. Fear and the constant exposure to surveillance, reinforce the dependency on surveillance for our security. We experience the public space as scenario where we are constantly under the spotlight and therefore the scrutiny of the gaze. 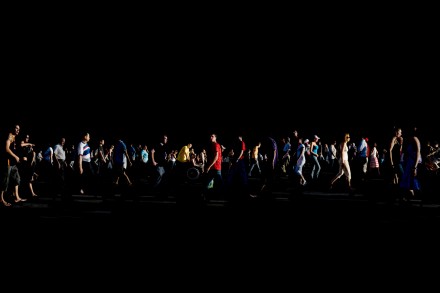 Our dwelling in public spaces is archived in visual codes and the archive is susceptible to being manipulated by forces of those in power, which in a sense marks our surrender to the management of fear by the state3. Mike Davis defines the spiral of anxiety, suspicion and fear of conspiracy as “Ecology of Fear”4.Unequivocally he predicts, “ Security will become a full fledged urban utility, like water, electric power and telecommunications”5. 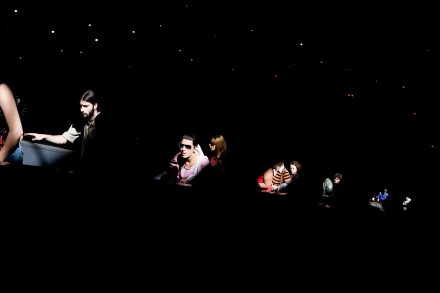 A paradox is outlined when experiencing the public space, between the senses of anonymity but yet always identifiable as Benjamin’s quotes suggest at the beginning of this paper; that no one can be truly anonymous since the traces left behind can identify him/her.

The manipulation and construction of the images materializes the discourse of the surveillance. I was in a position of power by placing people in imaginary urban landscapes that do not “truly” exist and therefore the people “have not been” there, in a strict sense. 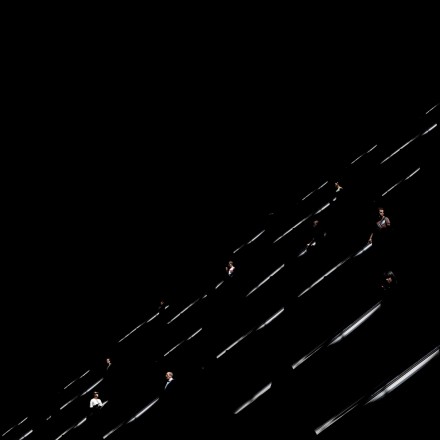 Traces looks at the theatrical in the quotidian. It invites the viewer to be a witness of a spectacle that takes place in common places for the spectator, (train stations mainly). The spectator is also the pedestrian protagonist of the images; commuters observe their own routine existence in the city.

One could say that the imposition of this controlled society has turned all of us into flâneurs that stroll the city with detached observation, we move through the crowd with our “feeling” of anonymity. According to Gregory Shaya, in his paper The Flâneur, the Badaud, and the Making of a Mass Public in France, circa 1860–1910, “for the flâneur , the urban crowd is a “veil” transforming the “familiar city” into a strange phantasmagoria, creating a sense of “drunkenness” accompanied by the illusion that one can decipher the character of pedestrians by the fleeting appearance of their physiological appearance, thus reducing even the most idiosyncratic individuals to mere types”6 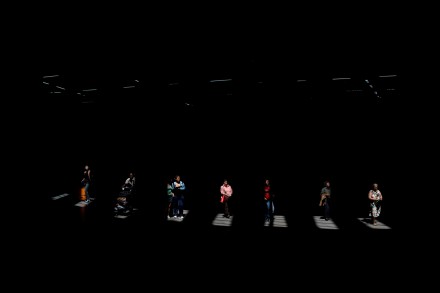 Even though we spend a vast amount of time in places like train stations or airports, they are not social places, like the streets and squares used to be. Now public places are “to move through” and not “to be in”. It is common to hear or read now-a-days “if you see something suspicious please inform someone of staff”, every one of us is under each others surveillance, therefore sociability has decreased and withdrawing into silence is the only form of protection7. Traces got interested in that silence in that non-relationship that is explicit between people in train stations. People do not want to be associated with someone else, there is always distrust in the crowd, the stranger is a threatening figure. Carlo Salzani wrote in his paper The City as Crime Scene: Walter Benjamin and the Traces of the Detective “The crowd is a threatening phenomenon because the asocial and the criminal may hide in the urban multitude”8. The places where these choreographies take place are not meant to be specifically described, therefore are meant to function as a metaphor, this intention would bring the project closer to a global viewpoint and to comment on today’s social utopias. In several images of Traces there is an explicit comment on mechanization of the multitude; modern life has shortened all distances and places like train stations, airports feel like a human assembly line.

In the hypercapitalism, the production processes have commoditized almost every conceivable aspect of human social life. We are commodities on display, and therefore my intention was to illustrate the pedestrians as they were in an assembly line. Staging a collective behavior that results in an abstract pattern of the spectacle of the multitude. 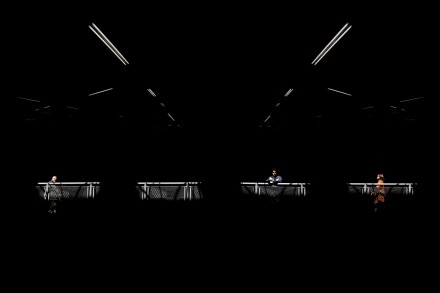 Modernization has changed our perception of scale, as Marc Augé (1995) mentions in his book Non-Places; an Introduction to an Anthropology of Supermodernity, humanity’s first steps in outer space reduced our perception of our space to an infinitesimal point. Scale has taken other dimensions not only in the context of space exploration but also in the world, “rapid means of transport have brought any capital within a few hours` travel of any other”9. Train stations like the ones I worked in are non-places where passengers obey the same codes, receive the same messages and therefore behave in the same way. These places as Augé (1995) states do not create relationships; only solitude, and similitude. At the same time there is no right to anonymity, your identity can be or is checked at all times10.

Depicting and representing photographically are matters of “image-making” as much as painting or drawing, where the importance, from my point of view, is to convey the intentions outlined by the maker and where one wants to establish the dialogue with the spectator. I believe montage through digital technology has brought us back closer to the conventional representation of the world, with the difference being that the resulting image has a photorealism that traditional formats of representation did not accomplish11. The use of montage in this project is an allegory to Benjamin’s “literary montage” where scenes are constructed with a narrative intention left to the spectator to decipher.

Surveillance creates a parallel universe of images that records “reality” through mapping and archiving the traces left in our exposure to city life. The veracity of that parallel “reality” is questionable since it is a malleable footage susceptible of being edited to convey the interest of the ones in power of the “edition”.

The modern transport infrastructure is an example of places where our belonging to a surveyed multitude, that obeys the same orders and therefore behaves in the same way, turns explicit. Isolation is the main characteristic of these places where every one of us is under each other’s surveillance and exposed to the scrutiny of the place. Searching to comment on our exposure to city life, Traces invites the spectator to reflect on the legal and ethical debate of surveillance. How can the images of our selves be used in the future? Is this atmosphere of control that has now become our way of life the freedom that the prevailing system vogues for? How is our behavior in the public space being altered by the culture of suspicion? Are we part of that surrendered multitude?.

Finally, a last question that needs to be asked now is; can there be an absence of traces? Is there someone that dwells in the public space that does not leave traces? To go undetected in the modern city is a utopia on anonymity. Is it possible? 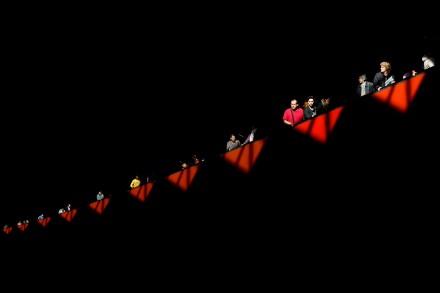 Next article »
Tomorrow it will snow, by Ieva Jansone
3 trackbacks on “Traces of a Lonely Crowd, by Manuel Vazquez”