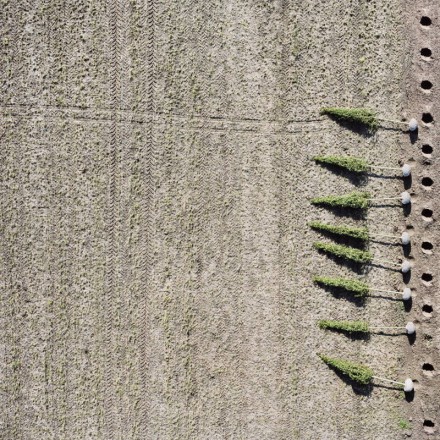 I began making aerial photographs in 1991. I did not shoot from a plane or a helicopter – I used a kite. I still engage a kite.

My camera hangs from the kite’s line and its lens is pointed down. I stand with two feet solidly on the ground and try to appraise the view from the camera as well as I can from my position.

There are easier ways of shooting photos.

I am fully empowered to choose a subject, to find the best location to take pictures of it by noticing from which direction the wind blows; I can select the time of the day, the season, the light; nevertheless my work will be much affected by chance.

This concept inspires me. I am not aiming at taking the ultimate photo. I love to be surprised by what is invisible to me, yet the camera easily registers. The so familiar landscape is turned upside down, that is what happens.

This approach to photography started at the time when I was an art student concentrating on drawing and painting. I used kite photography to give direction to my paintings, which were large and grainy. The viewer would define them as abstract even if they were rooted in realism.

My dilemma became: do I paint large landscapes as a gritty generalized structure, or do I paint photographic details, thus making the landscapes recognizable?

Meanwhile, I discovered a wealth of details on the negatives of a few photos shot at random, such as a swan in low flight over the polder; two horsemen following a dirt road; a farmer plowing his land. 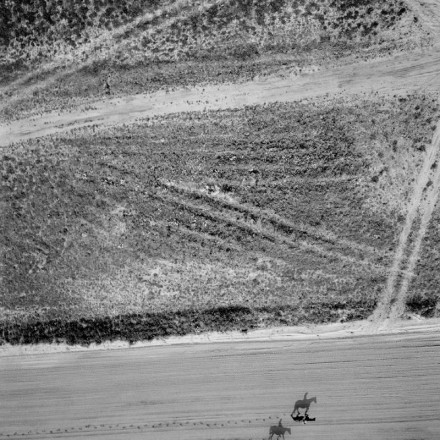 Eventually, I decided to completely skip the transformation from photo to painting. I was discovering the power of kite photography: its detailed presentation of the larger, omnipresent composition; its close relationship with the visible truth; and the abstraction created by an uncommon viewpoint.

The early series were black and white images printed small scale, at first almost 5″x5″, later 6″x6″. The Dutch polder was their subject, and all of them showed something happening in the landscape. I exhibited these photos in a row, as a storyboard; the photos’ anecdotes connect them and create a loosely linked story line.

A narrative image draws the viewer’s attention to certain spots. Not all details will be noticed equally because the anecdote outshines the landscape’s structure. My approach of the landscape, from straight above, defines that all segments in the image are equally far from, or close to, the viewer. Foreground and background both don’t exist; each element is of the same importance. The squareness of the frame serves this neutral cutout and indicates a sort of scientific or carthographical research.

In the series I created after the black and white photos I concentrated on securing textures in “borderline” landscapes – in areas where urban culture and nature were meeting. The photos become more and more abstract; therefore it is difficult to recognize the subject’s scale or its origin. Sometimes there is a fence, a footprint, or a blooming dandelion to put everything in proportion. The viewer can switch between abstract composition and factual representation. This collaboration of composition and detailing naturally leads to larger print formats and a growing importance of the frame.

What do I want to show within this frame? Or, maybe more important, what don’t I want to make visible? I am striving to create images the viewer may look at twice or three times without understanding what precisely he is looking at. Leaving out concrete details produces a mysterious image. 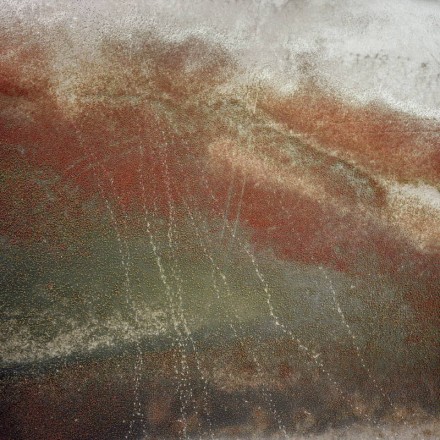 How abstract can a landscape become while remaining a landscape? I tried to find the answer to this question during extended travels, by searching for a fully natural landscape, not manmade, and lacking any cultural presence. I found these “natural-born” sites in New Mexico – deserts formed by rocks and sand and all forms of erosion. A barren landscape, too, with scarce vegetation.

In White Sands I created a triptych in which I believe I reached the ultimate abstract landscape. With no “things” to see, and no vegetation to indicate any scale, what is visible is just the soft incline created by gypsum. Not the landscape is subject of the photo – daylight is.

This natural desert landscape is in strong contrast with the Dutch culturally defined landscape. The Dutch landscape was efficiently drawn with functionality in mind on the drawing boards of urban and rural planners. Tulip fields, hothouses, land worked by farmers on tractors with their GPS handy. Not just one, no, uncountable “little things” form precisely lined rows.

Between 2001 and 2003, I took photos of poplars and willows in Vlaardingen’s Broekpolder. This polder was raised with silt taken from Rotterdam Harbor. The plan was to build homes. But after proof was delivered that the soil was contaminated with cadmium and mercury, no homes were constructed, and trees were planted.

Thus was created a splendid “green town”. The basic plan for the urbanization was executed after all, yet with lanes and paths for streets and trees planted in a clear grid instead of houses. 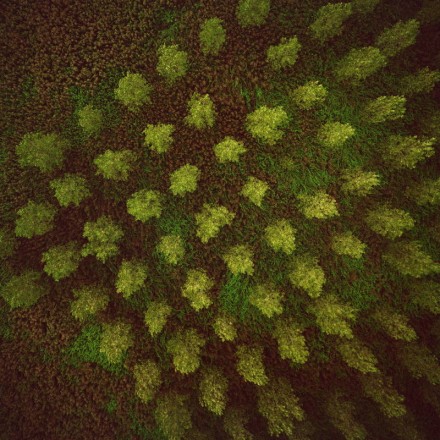 After 2008, I took photos of tree farms in Boskoop and Kesteren. A patchwork quilt of very different, neighboring agribusinesses separated only by a narrow road or a ditch. Here a bald, recently plowed field; there a piece of land full of holes dug for future trees.

I found an enormous variety of visual elements. They show up not just because of the different seasons, but also through the stratification of the land. Trees, soil, holes. The combination of a tight grid and the camera’s central perspective results in a distinct depth, while on a cloudy day foreground and background may slide into each other. 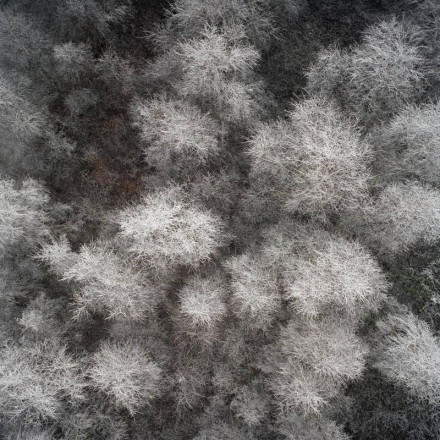 The landtract’s and the trees’ small scale (trees vary between 3′ and 12′ high) allowed me to adjust my technique. Instead of a kite I used a long fishing rod on some occasions. On top of this rod is a 2,5″ x 2,5″ camera with a wide-angle lense. A self-timer is adjusted to give me enough time to telescope the rod and manoeuver the camera above the subject. The frame of the image begins in front of my own shoes and measures roughly 30′ x 30′.

I am now finding I get more control of the ultimate image.

In the well-defined organization of the tree farm I can choose to enter just one irregularity in the image. Or, I can set the frame exactly parallel to rows of trees. 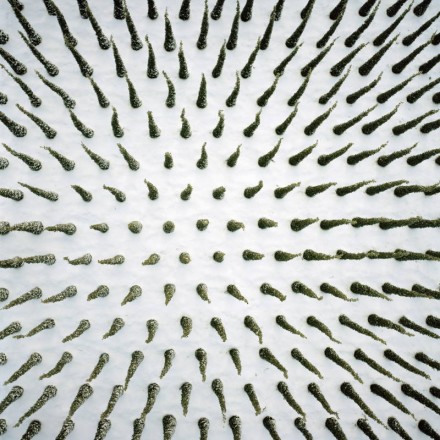 While working on this new series, I learn to understand more about the functions of shadow and light; the relationships of fore and background, and of the trees and the land where they are planted.

Even though this series “Baumschule” deals with an extremely defined cultural landscape, it are the abnormalities that jump into view. The presence of all of these objects arranged to form rows creates a new form of abstraction, not because of the image’s emptiness but, to the contrary, because of the presence of so many “things”, and their patterns and rhythms.

Funny, the irregularities in the patterns cause the viewer to once again notice nature… 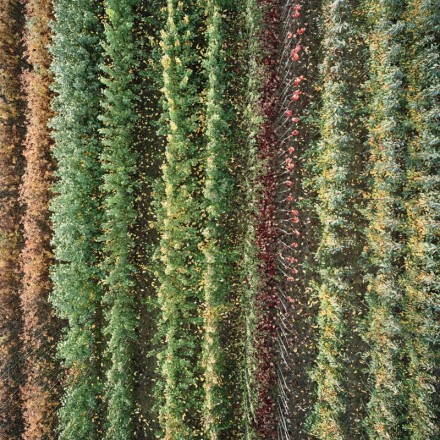