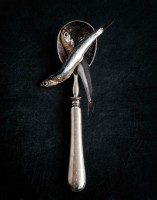 The photographic work by Sophie Tramier, exclusively in natural light, is dedicated to textures, transparencies, shapes. Fishes, sea food, pastries, dishes, cutlery, bottles… all these objects came to life in front of her lens, constituting elegant and sophisticated compositions images. Not only simple still life, every image reveals her personal story and universe.

Here you have her photos and an interview concerning her work and her photographic vision.

Fabiano Busdraghi: Can you tell your history as a photographer?

Sophie Tramier: Ever since I was a child, I have been attracted by photography and its magic. 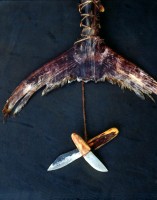 It all started with the family photos —big boxes at my grandparents house where all the photos were kept— stories of the lives of ancestors and people unknown to me. It was a voyage through time, through landscapes and, most of all, through people. I also loved the slide shows of vacations which reminded me of happy moments and allowed me to reflect upon my own personal story.

Fabiano Busdraghi: How would you define photography?

Sophie Tramier: Photography is a human voyage through time, imagination, emotion, places and remembrances. It is a way to reveal a universe, or a memory. 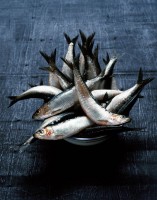 Fabiano Busdraghi: Why did you started to work with Nature morte1?

Sophie Tramier: Nature morte is a term which comes from painting. To me, it is not very well adapted to photography.

I began by taking pictures of people. I was passionate about this work and couldn’t imagine doing anything else. It wasn’t photojournalism, but pictures taken with the cooperation of my subjects, whether they be portraits or fashion shots. I was looking beyond the outside appearances of personality and for the beauty within each person.

Later on, I was offered jobs photographing interiors, which I did with the frustration of not being able to sufficiently express myself in the images. It was a matter of just being able to notice the salient aspects of beautiful places, even though you do need artistic ability for that! 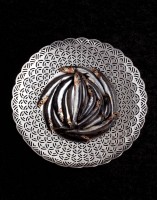 As a result, I began shooting still lifes to have more freedom in my choice of subjects, textural details, composition and lighting.

I don’t have a “reporter’s instinct”. I like to reveal a reality by working with an image.

Fabiano Busdraghi: So, you build your own compositions. Do you think the final image is what really matter, the photographic result, or the composition and construction work, similar to sculpture, is important in itself?

Sophie Tramier: I build my images instinctively from various elements such as textural details, a particular place, etc… At the same time, I’m always looking to include a meaning or to offer the viewer several ways to read the same image.

An image cannot be just aestheticism. Most importantly, it must tell a story or stories so that each viewer can accept it as their own.

Fabiano Busdraghi: What do you precisely mean by instinctively? Generally, do you have a precise project of your image? Or you allow the composition to evolve, improvising, following the evolution of things?

Sophie Tramier: I begin with a vague image of a project and then I let it reveal itself to me little-by-little, right from my first shots. I need to have a certain distance, a fresh look at my images which will unveil the final way to create it. 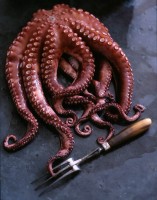 Fabiano Busdraghi: Some times ago you told me you work exclusively with natural life. Is this a technical choice, do you prefer daylight quality, or it’s to establish boundaries or may be a theoretical choice? Why you love natural light?

Sophie Tramier: I’m sensitive to the quality of natural light. I observe it a lot, and I adapt to it. It can reveal a face, a body a texture or an image. It’s the light which even dictates which angle I will shoot from! There is nothing better than natural light. I particularly like back-lighting, semi-obscurity and soft-lighting.

Fabiano Busdraghi: You work mainly with food: recipes books, pastries, fish… are you a gourmet?

Sophie Tramier: In fact, I became a food photographer without even knowing it! My first still lifes were of aromatic herbs —but not for cooking purposes. I was photographing them just to make images. Finally, it was these photos which incited my first orders for food photography, which came quite naturally. 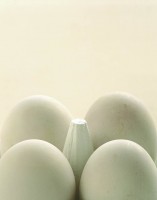 Unconsciously, I was “trapped” by my love of food!

When I began, food photography seemed to be the opposite of what I wanted to do. I had never thought about creating images without people in them. Food photography at that time was very different, very « clean » and very serious. Not at all simple or natural, apart from a few great masters such as Irving Penn, whom –without even being a “food photographer”– made magnificient images of the subject.

I don’t really consider myself a food photographer. I’m more like a “gourmet photographer” attracted by lively culinary details which I find sensual and inspiring.

Fabiano Busdraghi: Every photographer has a mental archive of “never made photos”. Because of technical limitations, slowness, lack of equipment, errors… have never been taken, and are lost forever. Can you tell us one of your “never made photos”? 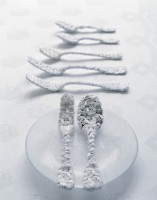 Sophie Tramier: I don’t visualize my images by way of technique. In general, I don’t like images which are technically overworked (such as the current trend with images retouched in post-production or those taken with artificial light) you lose all spontaneity and truth, even though reality is not necessarily the truth.

I don’t really have an image in my head that I regret not having yet made.

I would be more worried about losing images I’ve already made or not being able to share them. The long-term conservation of digital images is still unknown and I don’t like using digital photography for my personal work or family photos.

Fabiano Busdraghi: and what about the story of some of the images attached to this interview? 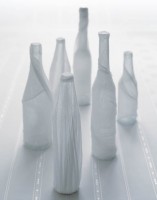 Sophie Tramier: I have a soft spot in my heart for portraits of fish. It’s personal work that I began with a stylist friend, Nathalie Nannini, who has the same passion for details. When Nathalie Démoulin and Stéphanie Svukovic at the publisher Minerva saw these images, they asked me to continue the work and create a book in the same spirit and in the same freedom of working.

That freedom, coupled with working with people of the same mind and spirit, permitted the success —beyond the images— of the book.

The book showcases the images very well and permits them to be seen by a larger audience.

I spent my childhood in the Mediterranean region between Corsica and Provence. My friends and I used to play on the beach and on the rocks, making “jewelry” such as rings and bracelets made from the suction cups off the tentacles of dead octopuses. 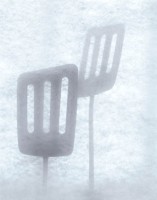 I like to photograph subjects so they seem to be something other than what they really are. This is probably caused by a slight dyslexia that I have which causes me to see things a bit differently.

In my series, Œuf-N I (Egg Invaders) the imagerie of the egg joins with that of the universe in the same symbolism.

Les bouteilles voilées and Les couverts dentelles are part of a series of images of wrapped objects and forms which evoke the censorship and restriction of women.

Sexual object is a confrontation of textural detail and sensuality. Between skin, fibers and textures.

As though in a game where the roles are exchanged, the notion of « portrait » and « still life » play musical chairs.

Fabiano Busdraghi: It is often said that photography is mainly practiced by men. Sure there are plenty of well known women photographers, who produced unforgettable work, but is true that a lot of people still have this cliché of the male photographer. Do you think that women has a different vision compared to men? If yes, what are these differencecies in your work, the feminine specificity? 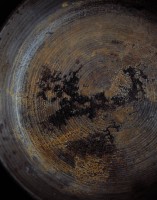 Sophie TramierMen and women don’t generally have the same perspective, sensitivity or sensuality —neither in life, nor in photography or, for that matter, in art in general. But, you can also see those difference within the same sex. It’s difficult for me to judge what is “feminine” in a work. Everyone has to judge that for themselves.

Fabiano Busdraghi: Can you cite the name of a photographer you expecially like and tell us why?

Sophie Tramier: Choosing just one would be frustrating!

Among my preferred photographers, I would include Sarah Moon for her poetic, dream-like universe, and her feminity. Every one of her images touch me personally. They transport me and make me dream, every time. 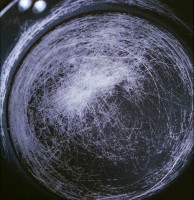 Others I like include: Irving Penn, Richard Avedon, pictorialists and turn-of-the-century nudes, Gustave Legray, Felice Beato (and other exotic hand-colored photography) Edward Steichen, August Sander, Dorothy Lange, Paul Fusco “RFK Funeral Train” (a book that I opened without seeing the title nor knowing its subject in advance), Robert Parke Harrison, Ismo Holto, Koto Bolofo, Joakin Eskildsen (his work on gypsies that I’ve just discovered), Laurent Millet and so many others.

Fabiano Busdraghi: Which book are you reading now? What is your favorite music? Any loved movie?

The book I’m currently reading —which I like a lot and wich makes me laugh— is « My stupid dog » by John Fante.

My favorite types of music are jazz, blues, soul, funk, reggae… But also like all types other music!

I like Italian movies: Fellini, Antonioni, Bertolucci… The last film I saw which really touched me deeply was “Respiro” by Emanuele Crialese