Things, Winds and the emptiness without a void – Notes from a conversation with Jungjin Lee 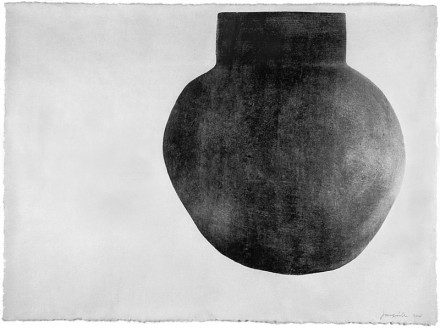 Jungjin Lee‘s artworks in real life size, had the magic of sending me back to the eastern culture, or to breath what I deeply felt while in a Tibetan monastery meditation state: Emptiness. Emptiness of mind.

And here I’m not talking of a transcendent trip from Paris where I saw her photographs exhibited at Camera Obscura Gallery, nor the wonderful technique she uses so organic and so appealing for touching-feeling. In fact, the way she prints the photographs is quite unique, over a huge organic paper, like the white Himalayan Lokta (hand made paper from the Lokta bush) where you can see the real fibers, and where Jungjin brushes the liquids to fix the images. It’s almost if you could feel and see the whole process: the brushing of the emulsion liquids, the collage of papers for them to become more resistant and the print fixed. Easy to feel that the author went through a deep meditation work beyond the whole process.

But this is what you feel and see on the surface, so I invited Jungjin Lee for a talk at a terrace, a Sunday morning by the Seine: a wonderful conversation, I must say.

Jungjin Lee was born in Korea, studying in Seoul and later in NY to study photography – being living between both places – taking NY now to live and work. 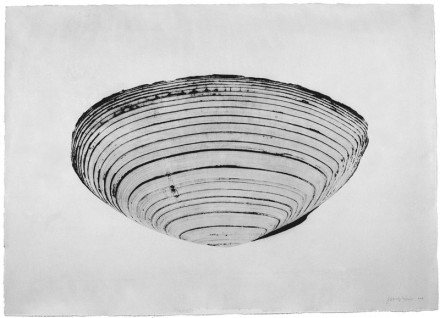 I should have been prepared for this kind of answers she gave to me through all the conversation we had, but I guess I forgot to re-locate myself in an eastern culture. How come Jungjin tells me that she likes the desert when she lives between 2 of the 4 most populated cities in the world?

Of course! In fact she doesn’t live there, she lives inside her own work. In her own silence. Her own desert, where she feels and lives the emptiness of the desert.

And there I was with her and with nobody else. In the middle of Paris, at a crowded cafe terrace, drowning myself to her own desert of emptiness. She was right, there was no one around us, just us two in the middle of nothing. Now I understand even better her work, her “Things”. 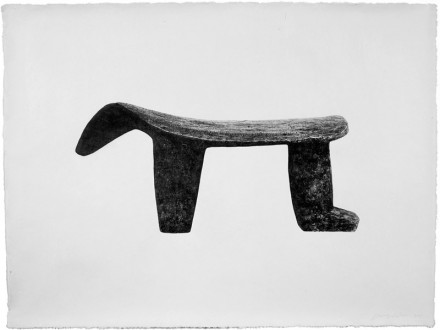 “The empty space is more important than the photographed/represented object. Like the stage of a dance show where you have the dancer in movement, he can’t move if there’s no empty space around.”

Ok, when I arrived, I introduced myself as an art-photographer who also writes, and who lived and studied in Tibet, so the conversation would be informal on the same level as colleagues. What I didn’t expect was that every time she paused to answer me she would send a Köan to the cosmos for me to catch it.

This text is all wrong. I should stop writing and just post her photographs with few sentences that she told me. No more was needed. The whole page empty with few objects lost in space so you could have a better understanding of what I’m talking about, but I need to try to make sense for myself, sorry for that. I’ll keep thinking out loud. In the void.

It’s curious to hear a photographer saying that the important is not the object, but the emptiness. A photographer would never say that, an artist does, in this case an artist who uses photography as a mean of expression, like huge drawings or paintings. Like a Japanese master of calligraphy brushing the soul’s “thing”: You must be the emptiness to create. 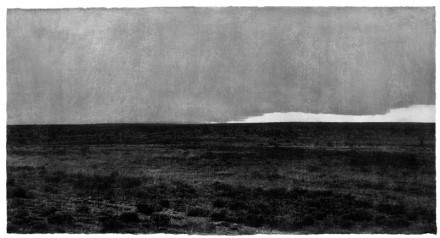 “I seat down, meditate and leave the Winds to go away from my mind. Then I can visualize a Thing. I focus on it. I hypnotize it. I collect its energy. And only after I get its soul I’m able to photograph it.

Then, in the studio, I take all the shadows that don’t belong to the Thing. And I evolve it with the emptiness with which I felt in meditation as that Thing only existed because there was emptiness of mind.”

I must say that I felt blessed with her words after being blessed by her works, but I’m sure that you already got it after reading few lines. Now, let’s go back to the Winds of emptiness. 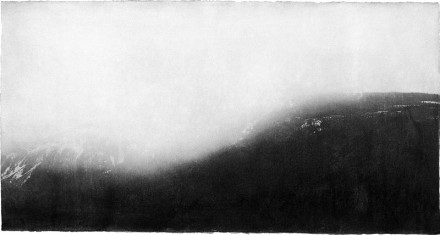 Form is emptiness; emptiness is form

One of the things that I found curious on this exhibition apart from the impact of Jungjin’s works was the differentness – almost opposite – feeling between the Things and the Winds, placed in 2 different floors, being the Things on the ground level, more exposed to natural light and the Winds in the basement, a more introspected room without natural light.

The emptiness that Jungjin shots on the Things is given to us, straight away. You’re invaded by that emptiness, and you feel placed in it as a viewer. You’re in there without even thinking. You’re the Thing itself.

However, down there at the Winds room, you must let your self drown in them, you must go and find your own emptiness as it was not given to you. You must be the tree. The rock. The desert.

Prepare yourself, as you will be emptiness. And emptiness is form. 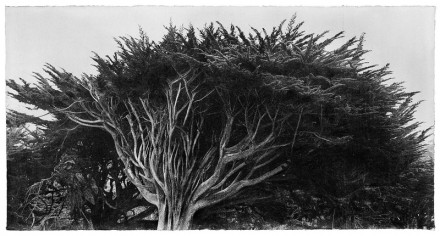 Talking about form, you don’t see people very often in Jungjin’s works, maybe because she lives in such populated cities like Seoul or NY, so you realise that she doesn’t need people to be in her creative world. I mean, I know she did few self-portraits with silent body parts, but you don’t see faces, people very often.

Jungjin smiles with that peaceful smile that she has, takes a breath and say:

“All my works are self portraits, I’m in all of them, and I always leave space for you to be there with me.”

“I’m now preparing myself to do a series of portraits, but it’s more difficult to hypnotise and take the soul of the people so I can shoot them like I did with the Things.”

She said with a magnificent silent laugh.

Things, Winds and the Emptiness without a void.

Notes from a conversation with Jungjin Lee, by Gonzalo Bénard.

Next article »
Portraits from Jaffa, by Bar Am-David