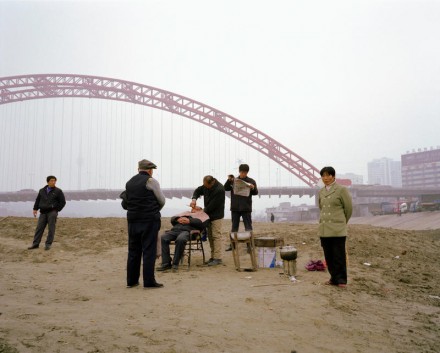 Yuhui Liao-Fan: What does “Photography” mean to you?

Rona Chang: Photography for me personally is the medium I use to understand and interpret how I see the world. It’s a comment on or reflection of what I find intriguing, interesting, and or inspiring. 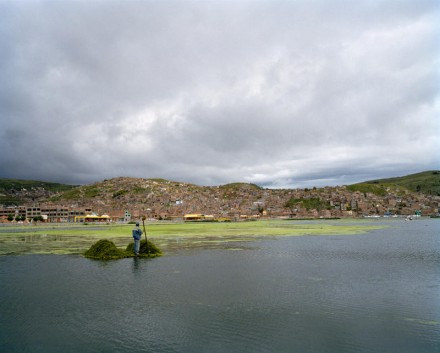 Yuhui Liao-Fan: Can you write a biographical introduction? When and where were you born?

Rona Chang: I was born in 1978 in Chungli, Taiwan. The town is famous for its beef noodles. It’s the first thing I eat when I get off the plane when I go back to Taiwan. My parents divorced and my mother, sister, and me moved to the States (Buffalo, NY) in 1985 when I was seven. We subsequently moved to Queens, New York when I was eight. 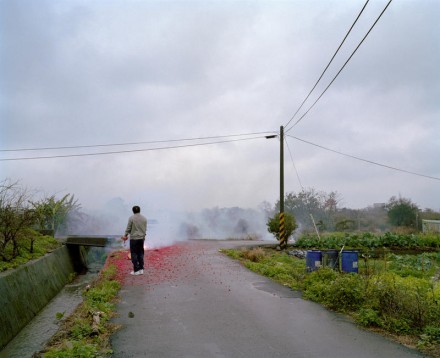 Queens is the most diverse place in the world with most of the world’s cultures represented right here in my current neighborhood of Jackson Heights. I don’t have a particular relationship with the Chinese immigrant community. I have always loved the diversity of New York City and think that I appreciate this mix of cultures most. I grew up with kids with varying backgrounds and related to the fact that we were all just kids. I embrace all of it, especially the amazing food that is available here. It’s a food lover’s delight around these parts.

My mother’s half of my family is from Wuhan, China. My maternal grandparents escaped the communists in 1949 and moved to Taiwan. My mother was the fourth child but the first of her siblings to be born in Taiwan. Her eldest sister was left behind in China and she still lives in there in Wuhan. My father’s family is Hakka and they have been living in Taiwan for about 400 years now. I have roots in both places and most of my immediate family is in Taiwan. I consider both Chungli and Queens to be home. While many consider me to be quite Americanized, I am deeply rooted in Taiwan and the States. 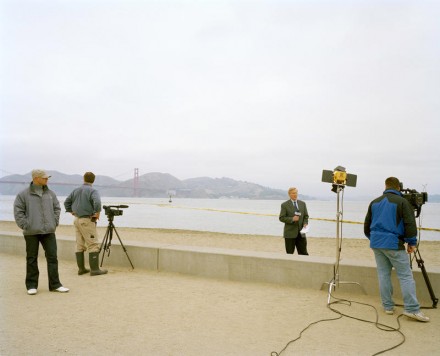 Yuhui Liao-Fan: What is your history as a photographer? What is your educational background? Where do you work?

Rona Chang: I was always interested in art as a child and that led to me attending a specialized High School in Manhattan called LaGuardia H.S. where I majored in art. I took a photography course there and fell in love with the medium. I went on to go to art school down-town at the Cooper Union for the Advancement for Science and Art. At Cooper, I took printmaking classes and a wonderful typography class but for the most part, I stuck like glue to my love of photography. I took all the photo classes I could get into.

For my day job I photograph art by digitizing and archiving flat art for museums, historical societies and other cultural institutions. For almost nine years, I worked at the Metropolitan Museum of Art. I have photographed all of the Japanese woodblock prints, Indian paintings, and Chinese hand-scrolls in the collection. 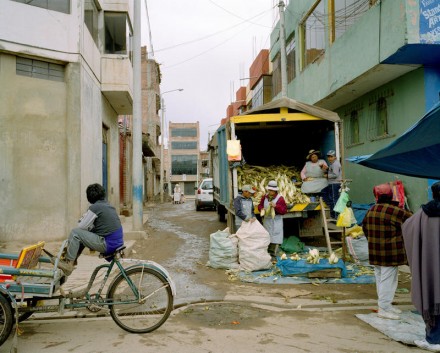 Rona Chang: When I photograph, I’m very aware of my composition, color, and content. I shoot film with a Mamiya 7 and scan it on an Imacon. I’m a minimalist when it comes to Photoshop. I basically clean dust off the scan and then adjust the color to best represent what I remember the scene to look like. 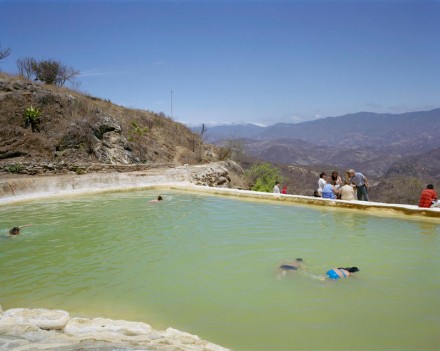 Yuhui Liao-Fan: What is the importance of travel in your work and life? As I was talking with a couple of friend with diverging opinions about travel and photography, one said that only traveling photographers can feel the essence of things, because they have a fresh and impartial approach to places compared to the biased visions of locals. The other one said quite the opposite, photographers should explore their immediate surroundings because when they are in unfamiliar places they are unable to completely “understand” it. I think both approach are valid but what is your point of view about this question?

Rona Chang: Travel has always played an important role in my life. Growing up in Queens allowed me to be comfortable hearing multiple dialogues spoken. The offerings of ethnic food filled my curiosity about cultures. Having friends whose families, like mine, hailed from halfway around the world was the norm. It was natural for me to travel and explore the world where my neighbors are from.

I have traveled to many of these places to photograph and to gain an understanding of the cultures I am fascinated by. Moving Forward, Standing Still began inadvertently on my first trip to China in 2000, on a street in Shanghai. While I intend to continue to pursue the project, I am now beginning to focus on specific locations. The Queens edition of the project is about going full circle: seeing the world, re-examining my immediate home environment and then seeing the world within the neighborhoods of Queens. Yuhui Liao-Fan: I think you are particularly interested in space. Can you describe and explain this fascination?

Rona Chang: I have a tendency to try to rearrange things within a space multiple times to see what feels best. As a child, I often rearranged furniture when my mom was at work and I would surprise her upon her return. Photography holds much of the same fascination for me. I look at all the elements and walk around to see which perspective makes the best composition or find a point of view that I find interesting and wait for the characters to move into position. Yuhui Liao-Fan: Simplifying it a bit, one can say that plain landscape photographers take pictures of breathtaking places, above all for their intrinsic beauty. In your case you try to portrait society through landscapes. Can you tell more about this interesting point? How can a photographer use landscape to represent contemporary society?

Rona Chang: For many years I only made landscapes (without any figures) though I was always drawn to make more interesting images than just beautiful pictures. The Hold Over Water, a series of images that explores my awe over water management sites are landscapes, though specific to a subject that is important to me. As I mentioned earlier, Moving Forward, Standing Still began inadvertently. I didn’t begin to think of the project as a series until I had a handful of images that felt like they belonged together and stood out from my previous work. 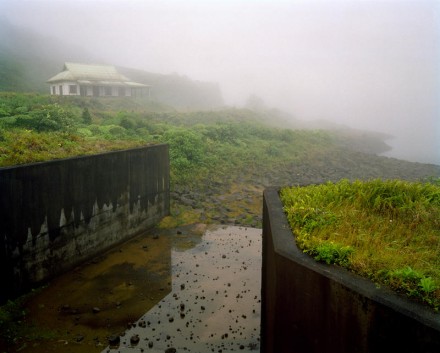 I began to explore the concept of photographing society through people within the landscape. The characters within the frame tell a story. It can be a scene or a whole story about a way of life, a daily activity, or an interaction that may be local or universal. These images have allowed me to think of my connections and similarities to my characters and at the same time, how our lives are inherently different.

Some of these images may seem timeless or non site specific but they each tell an interesting story. For example, The Cobbler, was taken in Emhurst, Queens. His set-up, in front of the public library, is one that I’ve seen in many parts of the world. One would only guess that it was taken in the United States because his sign is in English and Chinese. He is a figure in the cultural landscape of Queens, a place that is decidedly at once local and global. Yuhui Liao-Fan: Several of your photographs show people occupied in somehow odd occupations. Do you think that your pictures have a narrative approach or you are searching from something else?

Rona Chang: I don’t necessarily think of my images as having a narrative approach. I think of them as a way of sharing cultural revelations. I see a stage that is set, and the actors reveal a scene, but not always the movements of a whole story. There is something in it that you and I may be able to relate to and other parts that we may not, and that dynamic is what keeps me interested in searching for these compositions. 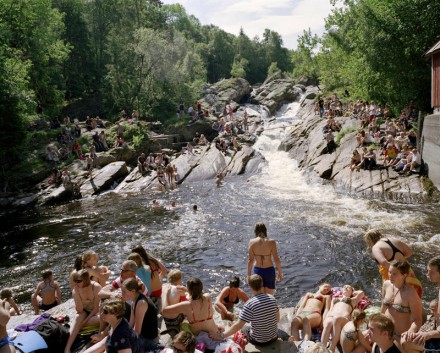 Yuhui Liao-Fan: Do you think is fundamental to live in a big and important city, or -for example thanks to Internet- the city in which you live is no longer a constraint?

Rona Chang: While I love New York, I don’t think that it is necessary to live here or any other big city to make good art. This is a topic that always comes up between my friend Alejandro Cartagena and me. He’s made a beautiful project, Suburbia Mexicana, based on his surroundings in northern Mexico. Alejandro is not limited by his environment, but instead uses it as his inspiration, or the incentive to make meaningful work. 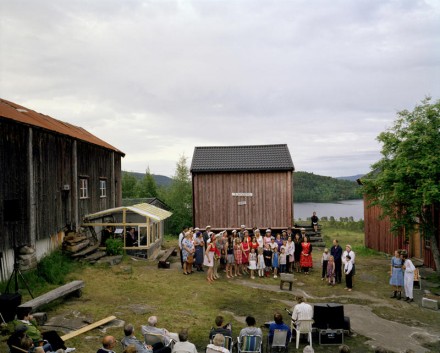 Yuhui Liao-Fan: Do you think it’s important to have a website? Is it is essential to have it translated into various languages? How the Internet contributes to the spread contemporary photography?

Rona Chang: Websites are a wonderful way to share your work. It is not essential but a good way to present yourself to the public. For me, it’s a good editing tool and a way to keep things current. And I do think that websites should be in English or otherwise bilingual if possible. The Internet is a brilliant way to make things more accessible to a larger audience but there is still much to be said about going to see an exhibition in person. The recent Stieglitz, Steichen, and Strand show at the Met is a handsome example. 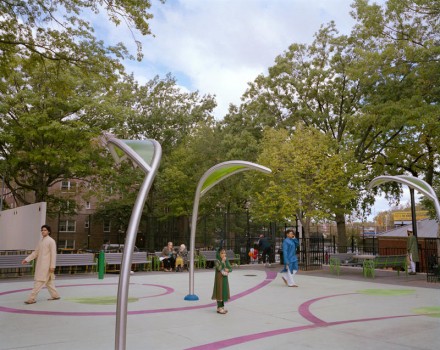 Yuhui Liao-Fan: Do you have a wish or a photographic dream?

Rona Chang: My photographic ambitions mainly involve working on a project I believe in, carrying the thought through, and presenting it. On the other hand, my travel wish list is constantly growing. Yuhui Liao-Fan: Are you familiar with Chinese contemporary photography?

Rona Chang: I know very little about contemporary Chinese art and photography. Much of what I have seen seems romantic, though this is not an absolute comment. One Chinese photographer who I deeply admire is Sze Tsung Leong. He was born in Mexico and is British and American so he has an interesting cross-cultural background as well. «Previous article
By the Lake, by Birgit Püve