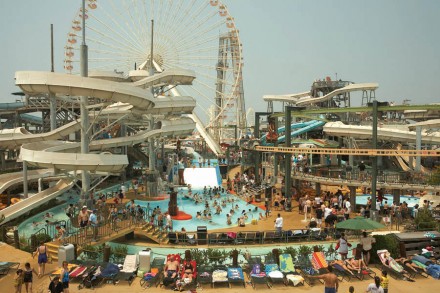 Text and photos by Jeremy Kohm.

I had come to the southeast shore of New Jersey to photograph a series of motels that the National Trust for Historic Preservation had recently listed as being endangered. A bit of online research further revealed that there was a water park in the area and it was a subject that I’d always been interested in shooting. After a few emails and several more phone calls access was eventually granted. The water park was soon added to my itinerary.

Considering that I like to take simple, uncluttered, calm and visually organized photographs this was clearly going to be a difficult task. The main challenge was how to take a chaotic, cluttered location and give it some sense of visual organization.

My strategy had two components in an attempt to create an image that had some sort of structure. The first was to explore and photograph every single inch of this place, from the top of the Ferris wheel to the bottom of the water slide. The second was to get a bit of height that would allow the viewer to look at this image without losing their bearings.

The high noon light allowed for a faster shutter speed, a greater depth of field and minimal shadows. I was hoping to achieve as much detail as possible so that the viewer would be able to see the stories and relationships that existed within the park at that exact moment in time. The shot was deliberately composed with the bright white slide in the centre of the acting as a visual compass for the viewer – almost like a home for the viewer’s eyes to revisit in the event that the image became too overwhelming. In attempt to follow the rule of thirds, the image was subdivided using the sky as the top section, the waterslides and steel rails as the middle section and the sunbathers as the bottom section. Essentially I tried to use every photographic rule and trick I knew to make the image seem clean and approachable from the viewer’s perspective. 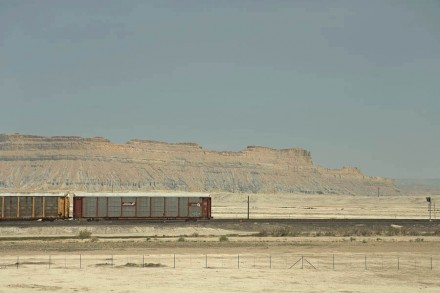 I’d be hoping to photograph a train for quite a while when the opportunity finally presented itself. I was driving a cube truck from Salt Lake City to Moab, Utah when I noticed that there were train tracks running parallel to the highway. A few hours into the trip and I passed a train – now the race was on.

As my cube van slowly inched ahead of the train I scanned the countryside looking for a location where the geography would reflect the shape and geometry of the train and it’s tracks. When I found some cliffs that seemed to resemble the train’s form, I turned on the hazard lights, veered onto the shoulder of the highway, grabbed my camera and climbed onto the top of the truck. One quick test shot and the train had caught up. I was able to fire off 5 or 6 frames before I had lost the shot.

The water park and the train really helped solidify my approach and methodology. It reinforced my aesthetic for trying to create photographs that are organized and easily digestible. In this particular instance I once again tried to stick to the rule of thirds by using the sky as the top third, the train and the cliffs as the middle third and the fence and ground as the bottom third. 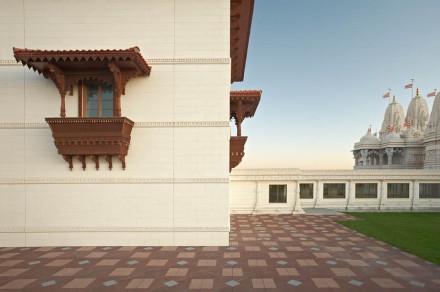 In my office I have a scrapbook full of ideas and newspaper clippings that seem to trigger some sort of visual idea in my head. If I’m ever caught in one of those non-creative moments I look through my archive and see what I’ve got. In this instance I came across an old newspaper clipping that mentioned the construction of a mandir in Toronto. The religious structure was being constructed by hand with each individual component being shipped from India. By the time I had revisited the newspaper clipping in my scrapbook the building had been completed.

I approached the building with the same methodology I tend to use in all my work. It’s like a game of billiards. I’ll walk around the entire location looking for the best perspective. Once I’ve found the shot that works for my eye I’ll attempt to frame it while trying to incorporate some key design elements. I go through a mental checklist to see what I can add to the photo. It could be any number of things: the use of negative space, repetitive patterns, symmetry, shapes and geometry, selective focus or creative lighting to name a few. In the case I wanted to emphasize the shapes, details and colour as they were what defined this fantastical location that seemed too perfect, even surreal. I framed the shot to asymmetrically so that, even with the uncontrolled natural lighting there would be some sense of depth to the shot. I climbed up a 14-foot ladder, set up my tripod and waited for the shadows to lose their contrast and then started clicking away. 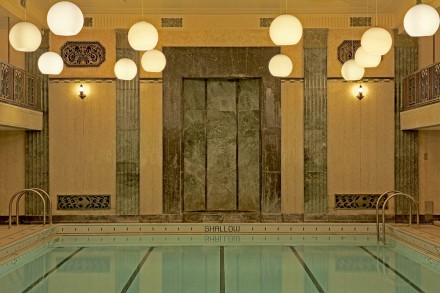 I’ve always been a fan of art deco and to find an indoor swimming pool that was constructed in the early 1900s was an opportunity not to be missed – even if my wedding reception was scheduled to start a few hours after I took this shot.

I was quite relaxed and calm while I set up my tripod and delicately moved the camera to find the most symmetrical perspective of the pool. I did however start to get a little stressed as the time ticked away while I waited for the swimmers to slowly exit the pool. By the time the water had settled I had become quite preoccupied with the reception that was only a few hours away. I took the shot and sprinted to get ready. I was a little late for the reception but I assure you it was my wife’s fault, not mine. 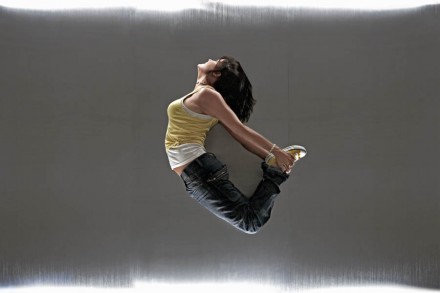 My approach to shooting people is the same process that I have always used for shooting environments. I went through my mental checklist and decided the most dynamic approach to photographing b-girls would be to keep them in the dead center of the frame, once again following the rule of thirds. I combined this tactic with the use of negative space so that I could shoot a stylized image that would focus the viewer on shape and form. Thankfully the talent was very patient and very flexible. 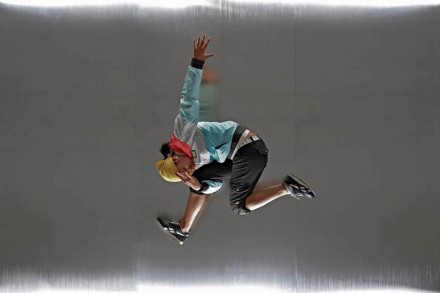 Next article »
Absolute Cure for Loneliness, by Tim Gallo
2 trackbacks on “Simplifying Chaos, by Jeremy Kohm”