We’re all just collecting memories… or It’s all back to Plato’s, by Derrick Santini 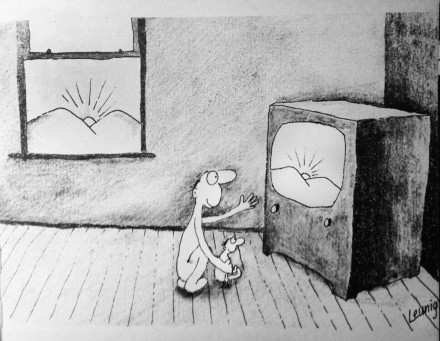 An inert desire in all mankind is to prove that we existed, and in a way Photography could have invented to do just that. Thus creating a tool that eventually became so commonplace, affordable and easy to use, that now, we all partake in this masscult, mass suicide of sorts…

It’s like Plato’s cave and the flickering illusions of life thrown onto its dark walls, with folk too scared to go outside, content to observe the projection of life going on, but not getting sullied in it. Then there was a period of enlightenment when man stepped out of the darkness, of our primordial past. Potentially living in the ‘first person’ and basking in life and all its magnanimous splendors, over time one huge mass awakening… Yet all the while, constantly reminded of history (His- Story) and its irrevocable horrors. To the point now, where we seem to be getting drawn back into the cave, once again to live a vicarious life, all be it, light years ahead, but as bovine as before. One consumed with narcissistic self-parody, obsessively documenting ones existence, chasing the shadows of our lives, instead of actually living our lives, truly parallel realities…

Back in the day I remember some friends in Scarborough, moaning at my persistent stopping to take a photo. They would say to me “Why cant you just chill out and live things instead of always photographing it?” I was like ‘yeah right’… but that was then, who would say that now? If you are not participating in this activity, then you are now the odd one out.

Taking pictures, documenting our lives, collecting memories could be Photography’s epitaph. But who’s memories are we re-appropriating. It’s Like in “Blade Runner” when Decker is rifling through Rachel’s family photographs, with the knowledge that these are implanted memories of a childhood she never had… How eloquent, shocking, and ‘real’ for Rachel, and ultimately a real maelstrom for Decker who has fallen in love with her. My heart yearns when he stops at the image of ‘her’ mother, sat on the family porch of someone else’s memories, and for that subliminal spit second the image come’s to life, as the shadows shudder and sway in the long winters sun. These fragile real / imagined memories are what binds us as species, displaying the power and universality to unlock very personal memories seen through someone else’s memories, and unrelated photographs, images.

I realized a long time ago that as a Photographer, one was indeed a collector of memories, not just my own, but of all the people I photographed. The combined weight of all these memories is huge, and something I truly cherish and treat with the upmost respect. Re-appropriating peoples’ memories or indeed something way more profound was laid bare many years ago when on location in a foreign land, way up a mountain. I was shouted down by an old hag with crooked cane who caught me trying to take her picture, believing I would take her soul if I photographed her, I didn’t argue with her, and walked briskly away but always remember the look of horror on her face. It’s these illusive and mystical qualities so inherent in photography that are a big part of its enduring nature and constant fascination. To capture (steal) fleeting moments, to mediate reality, compose and freeze time and space.

I love the idea of a Photographer being a ‘Shadow Catcher’ with a maniacal honed sense of seeing and reaction. Finely tuned, almost Zen like in arresting these shifty forms and sub subservient shapes. The shadow… our life long companion, there one second, gone the next, they touch you, chill you, and for sure seduce you.

When I started taking pictures I had no idea of these thoughts, or indeed what actually compelled me to start doing it, just seemingly the un-questionable desire to do it. I certainly wasn’t interested in taking pictures of my family or friends or the places I was visiting. I don’t really know what I was searching for through the frame of a camera, but what ever it was I found it. Indeed looking back at my early pictures they seem very naïve and straight. But the dialogue had began and I was hooked, and from then on, in a way nothing else mattered, because I had a reason to be, and would never be alone or wanting again. Ultimately I feel no real artistic expression can come from a conscious desire to do this or that, it has to come from within, and not from the mind – ego. One can’t go to college to learn how to become an ‘artist’, you cant download the program or get the app. The cogs need to be turning and the questions need to be there for any profound answers to be found. Further education and technology all help in this endeavor, but are just a part of the means.

My personal big awakening did happen when I moved to London to do the BA in Photography and Communication at LCP (London College Of Printing) now LCC. Back then regarded as one of the premier Photography degree courses in England. Now Photography degrees across the land are two a penny. Though costing significantly more, are a seemingly endless sausage factory, merry go round of further education, especially in the ‘arts’. LCP’s agenda and ideology back then was Feminist Socialism, and extremely contextual. Peddling concepts and trains of thoughts I shockingly had precious little knowledge of, but it was a defining time, and a much needed call to arms, but at the beginning I was like… ‘What the… have I signed myself up for?’

I love Photography now, as I did back at LCP, where I met and collaborated with other such devotee’s. Together we galvanized a strong resolve within our hardcore crew of ‘actual Photographers’, all fighting the post modernist status quo, with our flagrant displays of ‘purist photography.’ But the course, with all its context had started me thinking.

Photography today is a double-edged sword. On one side we have this near universal medium to communicate with, a visual language that we are all encoding and decoding on mass, and increasing our awareness and connectivity. The other is the potential fallout from this Istagram generation, and its demeaning or belittling effect on traditional Photography. Many people voice these concerns to me, I hear them but don’t necessarily agree, its just part of the process. In my mind, Instagram with its nowness and its aesthetic, has defined its well-earned place like old Polaroid’s and Lomography defined theirs. Instagram and the like have potentially lowered the bar by making it totally accessible to all, but invariably has raised it. The sameness and generic look of all Instagrams (no matter who shoots them) is pushing people to want more, be different and ultimately stand out. But most importantly a photographic eye, and the curiosity in this visual discourse was initiated through the smart phone camera lens, spurring on many to evolve the Photographic dialogue.

I see this bolt back to Plato’s as a momentary loss of faith, understandably mesmerized by the glowing lights and moving shapes of this very intimate, and infinite virtual world that lies at the heart of our computer screens. Yet noise and stupidity abound online, so we have to filter all this information, ‘cant see the wood for the tree’s’ springs to mind. Focus… no pun intended, is a key requirement to success on any level and any context, indeed obsessively so. Access is one thing, stepping in and closing the door behind you is completely another.

Technology is the ultimate leveler, and as Nike said it ‘Just Do It’…

It’s only what’s in the mind that makes anything interesting, and now there’s no excuse for any one not to get involved and get your ideas out there. And through this amazing technological introspection, back once again onto our reflections, will culminate in a return much stronger, wiser and ultimately more Humane, and Photography is the catalyst for this profound change.

Next article »
A quest for the eternal, by Madhur Dhingra
1 trackback on “We’re all just collecting memories… or It’s all back to Plato’s, by Derrick Santini”