My home, by Mugur Varzariu 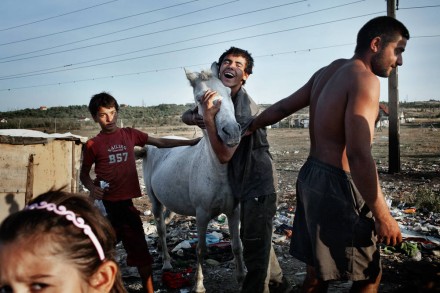 Text and photos by Mugur Varzariu.

When I turned 40 I decided to become a professional photographer. Some might say that was some kind of middle age crisis. If that would be the case I prefer this to going behind my wife’s back and having an affair with some half my age chick. That’s not my style… 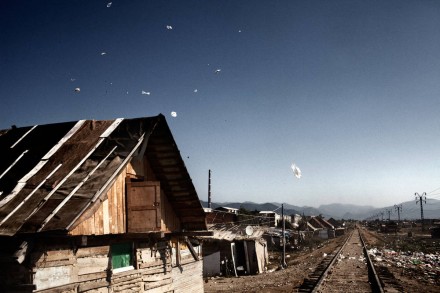 I say it was a moment of revelation. It all started in 2010. A former classmate and friend, that I didn’t see for 20 years decided to contact me after reading some text I wrote for a local TV online platform.

He was a staff photographer for AP since 1989. I’ve always dreamt of being a photographer so I asked him if I have what it takes to become one. We worked together for a few months and at the end he said that if I work hard enough I might have everything I need to fulfill my dream. I still hope he was right… While I still doubt my talent in this past two years, if I where to work for a news agency, I could have been easily declared the employee of the year… Twice in a row… 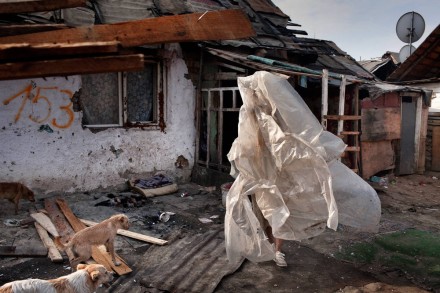 My first couple of months as a photographer where very confusing. I had no idea where to start. In a way I have to be thankful to Sarkozy. If it wasn’t for him it would have probably take me a lot longer to understand my own destiny as a documentarist. His morally wrong actions to move Romas from point A to point B triggered my personal fight to end the Roma plight.

Noticing a situation is the first step in recognizing and solving a problem. It was there and then in 2010 when I opened my eyes and truly saw this heavily challenged ethnic group. 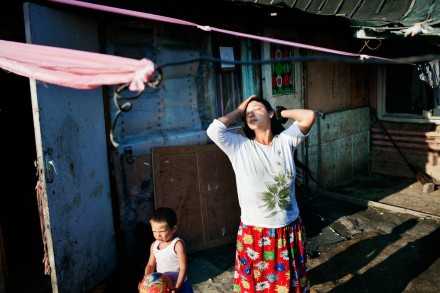 The sense of justice followed me since I was a kid. It was there when I defended my friends as kid, my colleagues, or when I discovered my ability to write. But it truly made sense when I decided to become a social artist.

As I already told you, looking at the problem is the first step in solving it. And what better way to look at things than through the lenses of a camera. The camera gives me the ability to look at things without staring. It also helps me hide my emotions, for the things I sometimes see would make even the toughest men cry like babies. 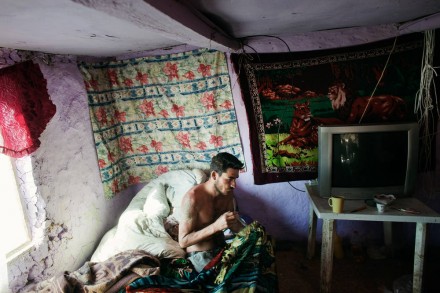 Roma man seen getting ready for work inside his ramshackle dwelling on Craica, an informal Roma settlement in Baia Mare, May 2, 2012.
© Mugur Varzariu

Since than I’ve been constantly following Roma’s realities trying to give the world a different point of view. While through my images I want to make people look, through my ideas I want people to challenge their own limitations and preconceptions.

I remember the day I heard the mayor of Baia Mare stating that he will build a mighty wall around a Roma community on Horea street, allegedly to put an end to the chaos created by the Romas in the neighborhood. I said to myself ‘look, this is a very thoughtful mayor indeed’…

The next day I flew to Baia Mare for the first time in my life. The plane landed around 22.30…Less than one hour later I was on Horea street. Roma man, seen helping his friends settle in their new temporary room on Cuprom, a formal factory office building, after their dwelling on Craica, an informal roma settlement in Baia Mare, where demolished, May 12, 2012.
© Mugur Varzariu

It was than when I first met Pise. Someone warned him of my presence and half an hour later he showed up. He wasn’t very welcoming as you would expect from someone claiming to represent the Roma community and he immediately stated that the wall is in the best interest of the Roma people on Horea street.

The following days I met with Pise and we had some long chats about his intriguing view on what is best for the Roma people on Horea Street and in general.

I spent 3 weeks documenting the ghettoization of the Roma community on Horea street and another week working for amnesty international on Craica, an informal Roma settlement threatened by forced evictions. 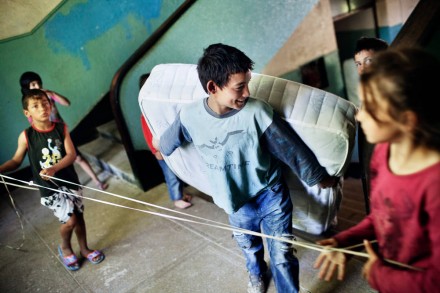 Roma kids seen carrying a mattress to their new temporary room on Cuprom, a formal factory office building, after their dwelling on Craica, an informal roma settlement in Baia Mare, where demolished, May 12, 2012.
© Mugur Varzariu

The initiative to enclose the complex was justified in the mayor’s eyes by the bad behavior of the Roma kids who allegedly throw rocks at passing by cars and occasional traffic accidents reported in the area. The plan also included video cameras and a police station to monitor the situation in the complex.

Facing media pressure, the mayor changed the initial plan that originally included only one exit, and started to build the wall on the last open side of the complex. Building walls around each community where we can find uneducated kids, regardless of their ethnicity, will bankrupt this country. The truth is this wall makes no sense other than segregate the community.

The living conditions in this social complex are so bad, Roma people living in informal settlements, with applications for a proper house, dating up to 10 years back, refuse to move on 46B, Horea Street.

I was really scared by the cynicism of romanian authorities. On one hand they claim they are concerned by the Roma kids well being so they have to build this ‘protective’ wall, and on the other hand they allow hundreds of kids to live in this social housing complex without direct access to electricity.

Without heating or electricity they live a life in conditions similar to those in the Middle Ages. The unfortunate ones get an improvised electricity line form their neighbors. When you discover how much they pay for this bootlegged current that fuels maybe one light bulb (20 Euro), you realize being poor doesn’t come cheap. 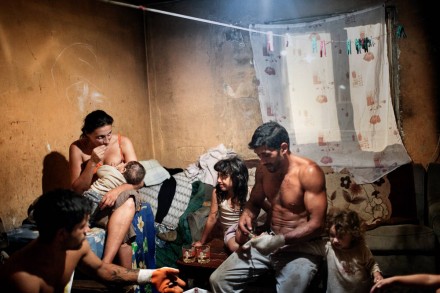 On many floors you can find broken banisters so walking the staircase it’s life threatening not just for a 3 years old but for all inhabitants.

Hundreds of kids of all ages live in the complex. International organizations ask of Roma parents to reach out and send their kids to school, while local authorities condemn their future by burying them alive.

While I was hopping to return to Baia Mare to witness the demolition of this shameful wall, this year I had to go back to document something even worse. The same mayor, whose popularity increased after he pulled the wall stunt, decided to clear the city of the informal Roma settlements, some dating 17 years back. So he made this promise the leading point in his electoral campaign.

This time, learning his lesson from the lawsuit that fallowed his actions to segregate the community on Horea street, he knew that he can not use force to evict the targeted informal Roma settlements. In order to make this happen, he again needed the help of corrupt Roma leaders. While he was publicly claiming that no one has to accept the temporary relocation on the premises of Cuprom, once one of the most polluting factories in Europe, Pise and his lawn-sharks lieutenants used threats, bribery and force to convince some of the Romas to sign the relocation papers. 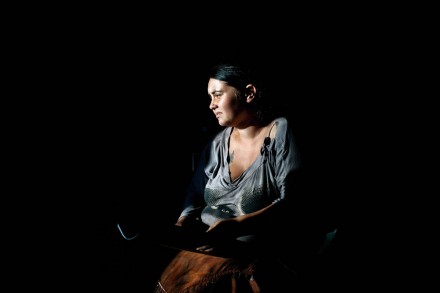 At Cuprom, there where 3 building made available for the displaced Roma people. After the first administrative building was filled up, sometime at the end of may, few days before the election on june 10, a second demolition order was carried out. This people where moved in the second building, a former factory laboratory.

The building wasn’t even dusted before it received it’s new tenants, not to mention properly decontaminated and sanitized. Bottles containing toxic chemicals where left laying around almost in all rooms including the basement. Roma man seen smoking inside his ramshackle dwelling on Craica, an informal roma settlement in Baia Mare, May 2, 2012
© Mugur Varzariu

Few hours after being exposed to the toxic fumes tens of adults and kids felt sick and required medical attention and hospitalization. Few families, scared for their kids life decided to return on Craica. Their ramshackle dwelling was leveled to the ground so they had to move into a dwelling that was only partially demolished.

The next morning the mayor declared the the incident was caused by the corrupt Roma leaders by using pepper spray. The same day, the mayor’s mother visited the laboratory, accompanied by local police forces. Scared by the toxic fumes emanating from the basement, fumes that could not have been caused by pepper spray allegedly used more than 24 hours before, she knew something must be done. The third former Cuprom building that was supposed to shelter romanians of roma origins after being existed from Craica, as seen on June 3, 2012.
© Mugur Varzariu

The vice-mayor and the head of the local police ordered the basement to be cleaned of all toxic materials. Ironically, they asked the Roma people to collect and dispose of all these materials without the use of proper anti-hazard equipment. For their help, the Romas where promised to collect all the scrap metal they could gather from the basement.

Roma people, working for DRUSAL (local sanitation company), later disposed of all the containers on the city dumpster.

The next day, the basement windows and all connecting ventilation shafts on each floor where walled in. The walls where washed and repainted and a major cleaning operation was ordered. 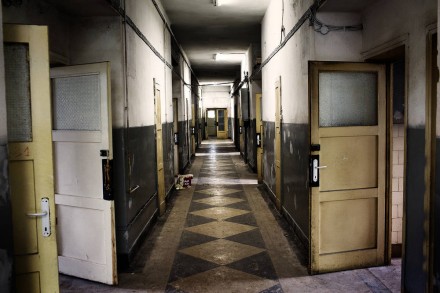 The hallway of a former chemical laboratory offered by local authorities as temporary housing, to romanian citizens of roma origins, as seen on June 3, 2012
© Mugur Varzariu

While his negligence could have cost the life of many innocent children, it most certainly did not cost him the election. The racists in Baia Mare and most probably some confused Romas as well made him the mayor for the next 4 years.

I remember asking different people their opinion about the mayor. They all, invariable said to me that Chereches is a god mayor. When asked why they replied ‘the city is cleaner’.

While french authorities believe that sending the Romas from France back to Romania is the solution, the romanian authorities, self-destructively, wish they could send the Romas back to India. I say self-destructively because, while the Romas could survive without us, we will be dead without them in a matter of months. For more than 80% of all people working in the sanitation system in Romania are of Roma origins. 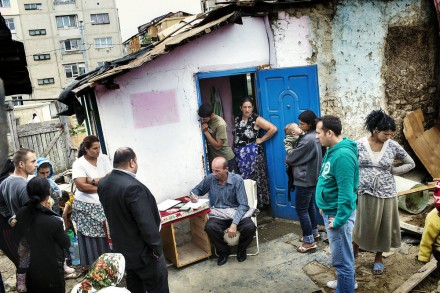 Romanians of roma origins that returned on Craica after they where moved to Cuprom and their house was demolished, seen giving written statements to roma NGO's about what happened, on June 3, 2012.
© Mugur Varzariu

Yet the Romas watch impassively as they are humiliated, segregated, deprived of their dignity while they quietly collect our garbage every day. Why can’t the Romas working for sanitation companies go on strike, like all the other professional groups, and have Chereches send his own mother to clean up his mess again? 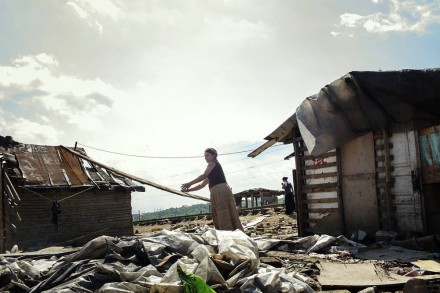 Roma woman helping rebuild the dwellings of those that return from Cuprom as seen on Craica, June 4, 2012.
© Mugur Varzariu

«Previous article
The spirit of gemstones, by Heike Rost

Next article »
The Accidental Photographer, by Steven Nestor
3 comments on “My home, by Mugur Varzariu”