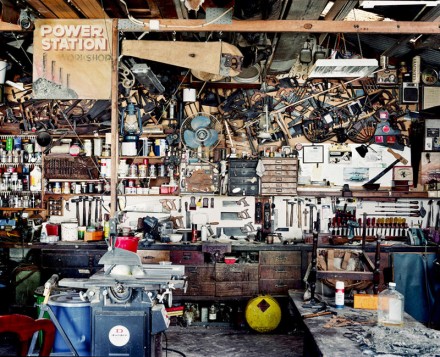 Text and photos by Jasper White.

This is me Jasper White

The Royal London hospital in Whitechapel is famous for holding the skeleton of Joseph Merrick, The Elephant Man. He spent the last years of his life at the hospital. Merrick was visited by the rich and the famous who would come to catch a glimpse of the Victorian celebrity. This is where I was born.

When I was six months old my family moved to Zambia. We returned to Britain after eight years and my grandmother gave me a Kodak Pocket Instamatic 30. I started to document my new life. I was uncertain what was hidden behind the English net curtains, wanted to probe and push past the English detachment. I began to take pictures.

My work explores the relationship people have with territory and space, the boundaries we define. I try to convey a sense of voyeurism. The compositions are simple and direct, as if looking through a neighbouring window. The images are detailed, arousing the viewer’s curiosity and making them look again to see what they’ve missed.

After studying at Kent Institute of Art and Design I was an assistant for five years, working with some great photographers, I became independent and worked for major internationals like HBSC and BMI, winning prizes at the Sony World Photography Awards, American Photography Awards, London Photographic Awards, the Hodge Awards and Creative Review. I have pieces in the Getty Collection. I’m represented in the US and UK. 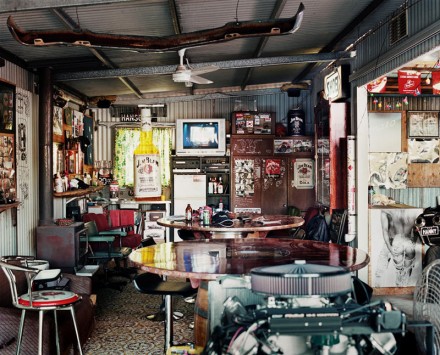 The ‘shed’ project began at the start of the New Year in a small town in the middle of western Victoria, Australia. I was visiting my sister and her partner who moved to country Australia in 2005. On New Year’s eve the local pub was disappointingly quiet and the local bowls club seemed to be the only place putting on any kind of party and then I noticed that the neighbours nearby were having a party in their shed of all places aptly named ‘boozy gully’.

Curious, I wanted to explore. I discovered that most of the men in this small town had sheds that they saw as their place of refuge from the world. If you came over for a visit often you went straight into the shed and would never even see the house. The sheds were equipped with everything you needed, television, sofa’s, bar stools and most importantly the beer fridge. 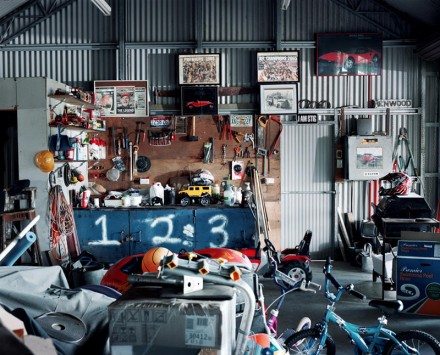 Shaun, the owner of ‘Boozy Gully’ is an ex-sheep sheerer. The shelves of his shed are filled with the cups and trophies he has won. Like many of the other sheds featured in this article the walls are decorated with signs and placards advertising beer.

His shed has a beer fridge, a television, a number of bar stools and two huge oil drums used as bar tables. It gives you the feeling of being in a bar whilst still being surrounded by the usual tools and equipment you would expect to find in a normal shed. Inside Shaun’s house there are walls waiting to be repaired but the shed is his refuge. On the fridge is a sign proclaiming – ‘Everyone should believe in something. I believe I’ll have another beer.’

The machismo is pervasive. A colleague of Shaun’s has a sign saying ‘No Sheilas allowed.’ The only female allowed into the shed is actually called Sheila, but she’s the owner’s dog. 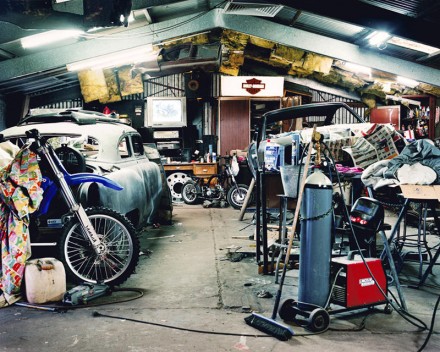 Paul, is the local wool buyer and his shed is literally festooned with pictures of scantily clad women. One of the popular meeting places for the men in the town this shed is often full on a Friday night when they catch up for a few beers after a hard week at work. Paul’s other great passion is motorbikes and his shed houses a number of bikes some complete and some needing restoration.

Hanny, another resident in this small town is a big fan of ACDC and ‘muscle cars’ his shed again has that same feel of being in a bar. It has a V8 engine standing like a piece of modern sculpture in the entrance to this huge space.

Morry’s shed houses numerous cars and motorbikes in various stages of repair. This is his hobby and the thing that provides him with relaxation. At the end of a hard day at work he comes out to his shed and works on his many projects. Sometimes he may simply sit amongst them and do nothing but drink beer and catch up with his friends but this is his refuge. His shed! 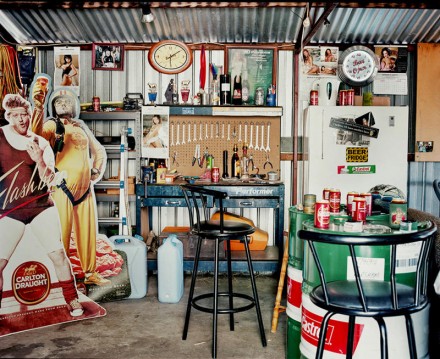 I discovered that the ‘shed’ as a place of refuge for men is not limited to this small town in Victoria. This is common to every small town in country Australia and this led me further afield.

Sydney Button’s shed is in the small town of Sans Souci. An apt place to live as it could be translated from the French to mean ‘No worries’, an expression common amongst his colleagues. Sydie has pictures he painted hanging on the wall of his shed. The portraits of his wife smile down over their wedding photograph. He is a skilled engineer who built Moth and Mosquito planes during World War Two. Now he builds on a smaller size. He showed me a scale model train. It took him four years to construct. Sydie is a man of many talents. He was the creator of the dye used for the first coloured plastic bottles in Australia. He told me a story of his friend Keith, a champion dirt bike rider who broke his back. He ended up in plaster, from his eyebrows to his hips. He was fed through a straw. Keith was plagued with itching and finally got his friends to cut off the plaster. Four cockroaches had built a nest between the hard white casing and his flesh. The friends gave Keith a bath and taped back the plaster so the doctor wouldn’t know. 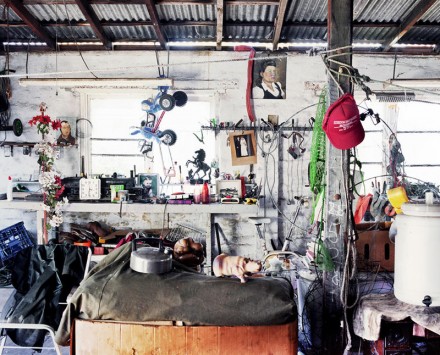 The True Grit ethos is strong. There are many images and statuettes of horses. Noel Trompp, has worked his whole life with horses, breeding them and breaking in the animals, 20th century cowboy. The men who build sheds are all different, all cut from the same cloth.

Gerry Peshke is an obsessive collector. Keys, screws, nails and old perfume bottles, there is little he doesn’t find interesting. He has gold rings on his fingers and toes and brews an excellent beer.

Kent Jordan lets his shed fill with his young children’s bicycles and toys, cluttered beneath his pictures of red sports cars and cheering crowds. 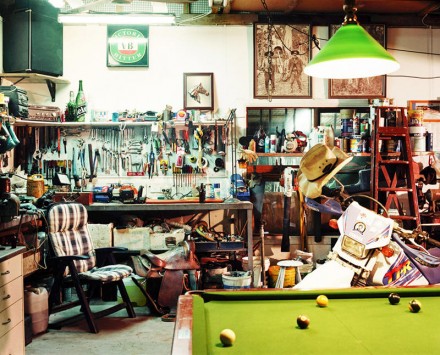 Beyond the corrugated iron walls of the sheds lie vast expanses of wilderness. This is one of the reasons I find the men and their spaces so interesting. An extreme focal point of human individuality in a barren wasteland. They are surprising, because the windows don’t offer the expected dust and cast off belongings. They frame an individual portrait. This is what I search for – the visual impact of the unusual and the unpretentious.

Next article »
A Journey, by Russell duPont
1 comment on “Mens Sheds, by Jasper White”