All photographs are flukes: the problem with photography competitions

Text and photos by Natalie Dybisz aka Miss Aniela.

One photograph is a fluke, and the photographer is a purveyor of flukes.

When I first started out in photography, I would think that I was not a real photographer because I felt like each of my images was a ‘fluke’. A fluke that I didn’t feel I knew, fully, how I actually achieved. In terms of lighting, posing, compositing – everything would feel almost arbitrary, especially as I was on both sides of the lens making self-portraits, often composing the shots blind. I would wait for the dawning of each ‘fluke’ feeling frustrated for all the substandard shots in between that gave me the nagging feeling that I wasn’t a real artist. 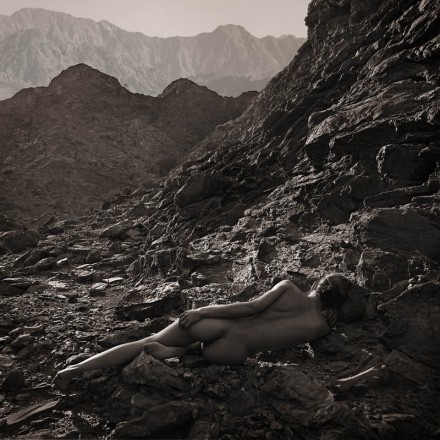 Sedimental: A picture we shot in 1 minute…
© Natalie Dybisz aka Miss Aniela

I’ve learnt that this feeling is actually the normal mentality of an artist (whether or not I was a real ‘photographer’ in the most physical professional sense was more down to whether I made money from photography.) But I began to realise that to be an artist, you just have to create art, irrespective of how great or not it might seem to others. From day one of creating art, we are ‘artists’. My thoughts have since evolved to entertain the notion that all photography is somewhat about flukes, about luck and chance, and I refer to all genres of photography. Before this comment is taken as dismissive of skill and talent, I will explain what I mean. Some genres involve more luck than others; for example, shooting the perfect image of a bird of prey is about timing, waiting, being able to capture the bird in the right place in the frame, in position, in focus: and that bit of luck in getting the shot. So whilst luck is only part of the recipe, the only things – the research and the patience – don’t necessary stand alone as the qualification of being a photographer. So the notion of what ‘photography’ actually is comes really down to experience, the constant repetition of a set of skills and traits – and imagination. 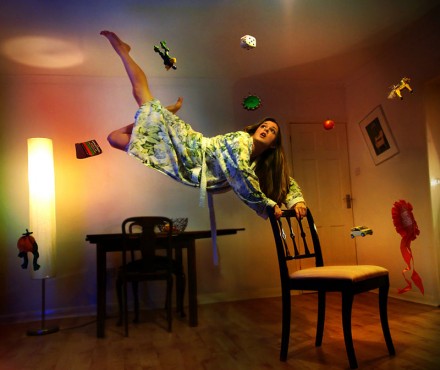 The adrenalin: …a picture we set up for 5 hours.
© Natalie Dybisz aka Miss Aniela

In a different photography genre, for example, in tableaux photography that is set up and contrived for camera, the images might bend more in the post-production, to gradually meet the artist’s full vision, at leisure – like a painting. But for every photograph in existence, the sum total of its subject(s), its setting, mood, story are not all down to the photographer’s doing. Nothing really belongs to the photographer or is unique to them, or completely under their control. The person photographed by a street photographer for example, is their own self, styled themselves, choosing their pose of their own accord, within their setting. In fashion photography, there is creative input from stylists, from assistants; the models’ poses from a familiar cultural dictionary of body language copied from images seen before, with the photographer shooting them also with a multitude of iconography in their mind that they have ever visually experienced. 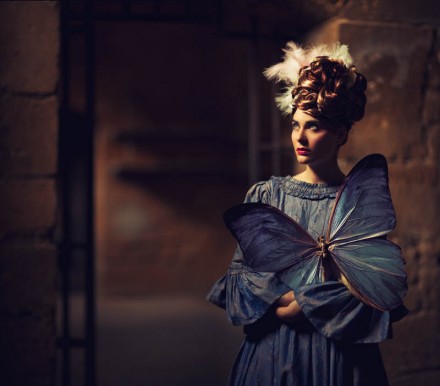 Contemplation: made with a butterfly shot in the Museum d’Histoire Naturelle. I nearly didn’t go to the museum, as I wanted to take a nap instead. So many of my images from this shoot would otherwise have been a different story.
© Natalie Dybisz aka Miss Aniela

Then there are all the unexpected things that happen during a shoot (any type of shoot) that the photographer will recount: when the burst of natural light came, or the model pulled a brilliant expression, a person accidentally entered the frame, and all the bits and pieces that fell into place that went toward the making of one picture. I could think of one unexpected quality for every one of my images. Everyone should be able to think of several random – strong or subtle – inspirations or references that goes into every one of their images. Even though a lot of my work is self-portraiture, featuring myself as the model whom I myself ‘style’, I felt even more than usual a force in action that would power my ‘flukes’ – if anything, I had to rely on flukes more.

Of course, it is the eye and skill of the person capturing and creating that makes the ‘photographer’. Whether the photograph is of a scene that had no interception from the hand of the photographer, or a set-up completely designed by them or another designer, it is the act of observation, angle and timing. It is the chemical reaction, between the subject and the camera, that constitutes the photographer’s mark. Even the photographer training on a workshop shooting a ready-made set-up has the opportunity to be creative. In the time they are given to direct, there emerges a window in which can be identified, even in its barest slither in a context otherwise devised by someone else, the creative input by that photographer.

One good picture does not make a ‘photographer’. All those things we associate with a good photographer: skill, or talent, or eye, can’t be faithfully conveyed in one single picture. It can give an overview, but not a conviction. Being a photographer is about capturing and creating images again, and again, and again; the ongoing functionality of production – both as a ‘photographer’ and as an ‘artist’. The persistence, the repetition, the accumulation of lots of those ‘flukes’ is the photographer’s real accolade. The measure is in their repeated persistence of making images happen: whether they are a wildlife, fashion, art photographer. It is someone who constantly instigates situations to shoot in. 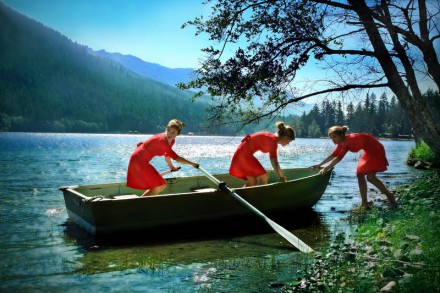 The escape: The images for this were shot reluctantly on large JPEG when we ran out of memory card space after rowing out from our cabin to the other side of the lake.
© Natalie Dybisz aka Miss Aniela

And this is why I’ve always sensed something I didn’t quite like about photography competitions. The idea of being judged for one photograph actually means very little. Of course, some competitions invite small series of images for submission – but generally, it is one concept, epitomised by one image, that they are seeking. And it makes sense – after all, the judges are looking for as straightforward a task as possible, having to sift through possibly thousands of entries.

In rewarding one picture, we are congratulating a photographer on merely one ‘fluke’ they have experienced, on one single effort they may have exerted to produce one image, that is questionable as to how much input was given from other people, and that in itself gives no indication as to whether the person really should be congratulated, esteemed, and rewarded as a ‘photographer’. 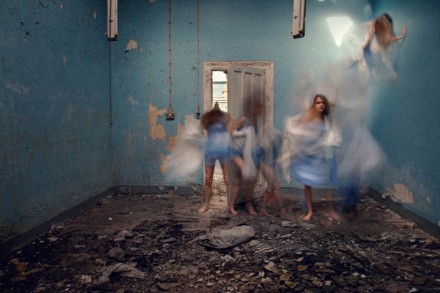 Her fleeting imprint: Shot in a heavily-guarded abandoned mental asylum we managed to get into during its last few weeks before being demolished.
© Natalie Dybisz aka Miss Aniela

Humans want it easy. Humans want to simplify. Humans want to compare one thing with another one thing, and make a conclusion about which is better. So in photo competitions, it makes sense that we want to look at one picture, react to one picture, and congratulate that photographer often on the basis of a pigeonhole into which we have placed them. We don’t want to have to look at a person’s numerous bodies of work, to understand their ever-evolving desires, to understand their mind and their intentions – even if we did that, the unique make-up that we discover in each person’s lifetime of work would become too mind-boggling to be able to sit it beside someone else’s work and state who should win a prize. 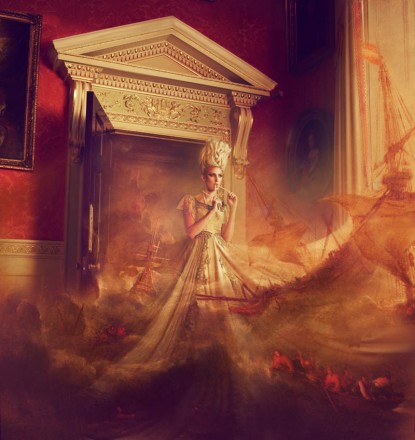 Storm Door: Shooting this without any idea I would add ships, I was going to close the door, but casually dismissed it.
© Natalie Dybisz aka Miss Aniela

I am not saying photography competitions are bad or should not exist, or that I have never entered one, or will never enter one again. They can be very valuable experiences on which to hinge and market ourselves, and it is precisely that: being aware of their over-simplification and what they really are about. First, your work must stand a chance of randomly catching the attention of the judge within that one split second when they first flick through all of the entries, and if for whatever arbitrary reason your image does not connect with them in that time, place and split second, your submission was futile. On the other extreme, even if your picture goes on to win the competition, it is not your picture, not the way you contextualised it as part of your series or your body of work – it’s a picture that has been re-appropriated by the judge in their specific time, place and taste – it becomes theirs, it’s their choice of representation of the competition. What/who they pick will always be on their terms. And though the rewards (prizes, awards, exposure) may be great – and worth shunning all of this philosophical drivel I’ve written – deep down, the winning of a competition doesn’t prove anything about your photography, your abilities, the profundity of your work as a whole. It only proves that people enjoy that one ‘fluke’ you orchestrated, and decided to give you something in return, and to accept you into their circle, at least temporarily.

I speak particularly of those competitions that do not ask for anything specific, opening up a whole range of categories for submission, where the criteria is even more blurred. I have opened up photography magazines where a spread of readers’ pictures are displayed, everything from penguins to naked ladies, and wondered what I’m supposed to think as I look from one isolated diverse picture to the next. 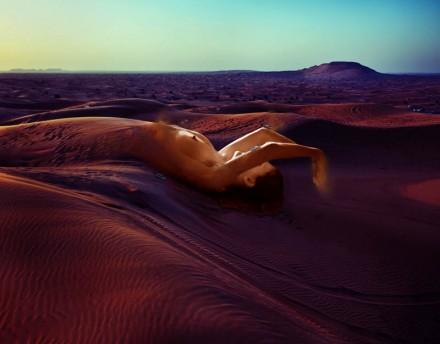 Handbreak: The cars and tyre tracks in the Dubai desert were not ideal on first glance, but then became part of a Gulliver-esque narrative.
© Natalie Dybisz aka Miss Aniela

I think photography becomes a lot more interesting and meaningful when we actually take the time to appreciate an artist’s wider body of work and read about their background and their process, how they manage the unexpected alongside the orchestrated, how they go on to make another picture, another and another (which is exactly why I enjoy Camera Obscura, for the time it devotes to every artist’s piece – and the diversity with which different artists talk about their work). What makes an artist/photographer is their continued strain of creations, the gaps between their pictures as well as the pictures themselves, and their refusal to accept the non-existence of originality by restlessly remixing their inspirations in their own way. 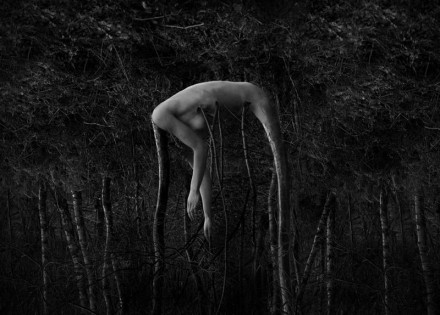 Parasite: Originating from an outtake of me stooping over in a field, along with an outtake of the wood.
© Natalie Dybisz aka Miss Aniela