Evolution – On Making a Picture, by Suzanne Révy 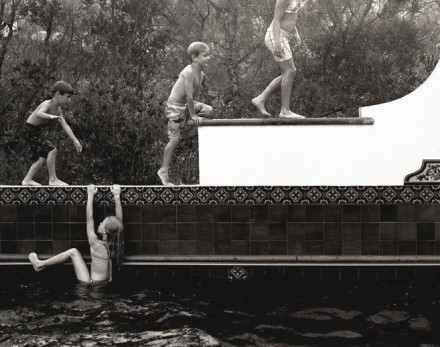 Text and photos by Suzanne Révy.

From time to time, it’s important for photographers (and other artists, I suspect), to think about their motivation and circumstances behind the medium we choose, and the work we make. I have long loved making pictures, but floundered to find my photographic voice when I was in my twenties and thirties. In recent years, however, as I mastered greater control over black and white film processing and printing, I turned the lens toward family and children, and have, at last found that voice. As a result of these photographic efforts, I have become keenly aware of how my children interact with and explore the world around them, whether in the back yard or on a far flung family trip. In photographing the small events and details of the life of our household, I have come to the inescapable conclusion that the most satisfying photographs for me bestow a kind of significance and importance to even the most ordinary of lives. I have, over the past several years, wanted to make pictures that are not only about my own family or my own children, but that can be seen and perceived as being about many children and families—to find some common truths. With all that in mind, I thought it would be fun to recall, and commit to paper the circumstances that led to the evening when I made my picture, Evolution. 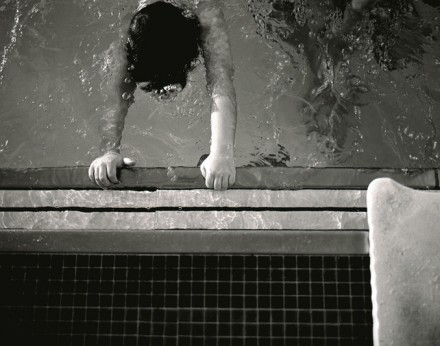 Two years ago I flew with my husband and two boys, Eric and Adam, to Los Angeles, the starting point for a grand road trip to see cousins, to visit tourist attractions and (for me) to make pictures in California. After a few days in L.A., we hit the road bound for Bass Lake just south of Yosemite. The journey there was a long one– up over the grapevine into Bakersfield and through the lush central valley. We arrived to find ourselves on a spectacular lake of shimmering shores and jade colored warm water. With so many coves to explore, and places to swim, fish or boat, it was difficult to wrangle willing participants to make the pictures I was seeing in my mind. Sadly, our stay felt woefully short, and though I photographed quite a bit, I was unsure if I had any keepers among the pictures I had made while we were there. 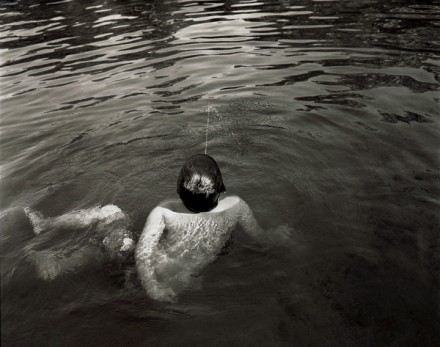 Our next stop was the Bay area. The long winding one-lane roads that snaked through the golden hills north of Fresno took us through some gorgeous farmland, but the ride was punctuated by the whining complaints of the kids growing weary of the car. Once there, we spent time with my husband’s family, and saw the sites of San Francisco. I found, however, the urban environment uninteresting to me visually, and to my surprise, the bright sun over San Francisco was a little harsh. In the end, feeling a little discouraged, I decided to enjoy our tourist time, and the company without the worry of making very many pictures. We headed back to L.A. for a final seemingly, endless ride in the cramped rental car for our concluding two days on the west coast. Two days, much to my relief, with little planned. 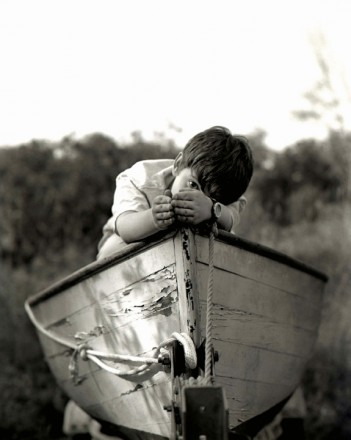 On the last evening of our trip, we got together with my brother’s and sister’s families with all the ingredients that make for a good time — a house full of kids, a warm night, a swimming pool, and my brother-in-law’s legendary ribs. As often happens at such times, the children banded together while the adults gathered into their own playgroup of sorts. I glanced over at the pool; the kids were climbing out of the water, walking on the wall along the back of the pool, and jumping back in. They were bathed in that diffused late afternoon light of Los Angeles. Knowing that only a few feet away there were pictures to be made, I couldn’t possibly enjoy the grown up banter at that moment, so I loaded up the camera and started to snap away. 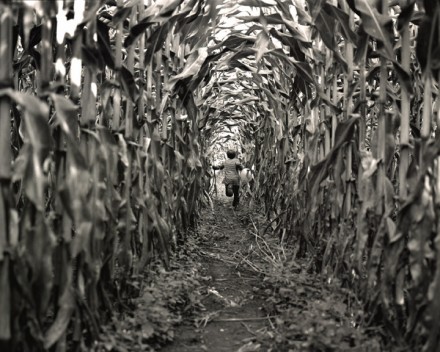 The kids weren’t particularly conscious of the camera and paid attention to me only when they wanted me to resolve one or two conflicts that arose between them (happily, nothing so major that they gave up their game). At some point, I saw half of Kimmy leave the frame as Ginger began to lift herself up. I honestly didn’t see what Adam and Max were doing, but in my peripheral vision I caught a glimpse of Eric just outside the frame. In the next frame Eric appears, and Kimmy has vanished into the water. And so the game went on for a good long while, and I was excited by what I saw.

Three rolls of film later, the sun had set, the light had become low and flat, and the ribs were ready. As we sat down to eat dinner and enjoy a glass of wine, I thought, “At last. Now I know I’ve made a good picture on this trip.” And my earlier frustrations seemed to disappear with that knowledge. 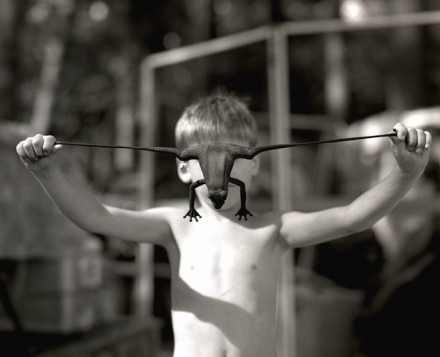 When I reviewed the film some weeks later, both my husband and a good friend were struck by this particular frame’s similarity to the Evolution of Man graphic that is so familiar. The human eye and the camera lens see so differently. My observations (and indeed our whole trip) had been disjointed, but the camera records everything in its field of view, and by revealing the details so easily missed, it can give certain pictures a deeper meaning. The kids’ game did not bring to mind the evolution of man as I watched and exposed the film, but the picture does. And for me it brings to my mind just how much each of them has grown and evolved as individuals. It is at once a record of a simple moment of play, a record of a family vacation, but it carries a meaning beyond the particulars of the event recorded. This dichotomy, this tension between the personal and the universal are the essence of a good photograph.

Oh, and by the way… I was happy to find the frame I call “Fool’s Gold” among the ones made at Bass Lake, named for the gold flecked sand found in the beaches there. 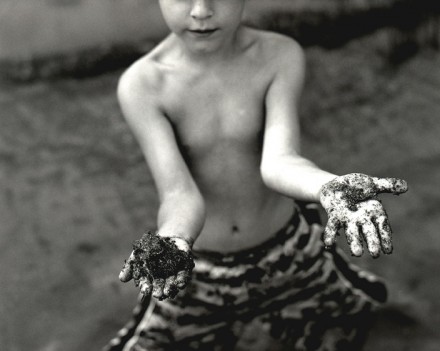 Next article »
The Spiritualists, by Shannon Taggart
5 comments on “Evolution – On Making a Picture, by Suzanne Révy”