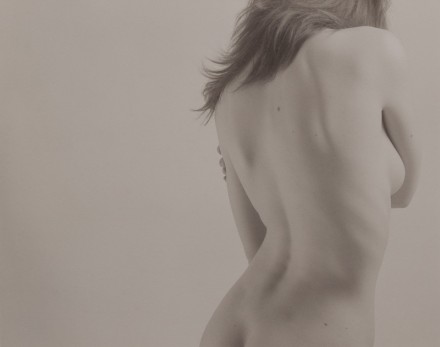 Text and photographs 1 by Ian Leake.

“Nude women are only Art if there’s an urn in it. Or a plinth. Both is best, o’course. It’s a secret sign, see, that they put in to say that it’s Art and okay to look at.”

I don’t think I’ve ever made a photograph of an urn before – not that I can remember anyway. And I’m certain that I’ve never made a photograph of a nude with an urn. Neither have I made a nude with a cherub. Nor the modern equivalents – nude on a rock, nude under a waterfall and nude in a tumbled down shack. But then again I don’t want to: Ingres had said everything that needs to be said in this style by the time he died in 1867.

Of course Sergeant Colon is a bit behind the times. Anything goes in the contemporary scene. Explicit nudity, sexual violence, and death are all labelled as art. The internet is full of it. And apparently it’s all fine just so long as there’s a naked, and preferably pretty, young woman in the picture.

I simply don’t understand it. Why do these people need to spew out this ugliness? Do they hate women? Is there so much violence in the world that it’s twisted their sense of beauty? Or is it all about money? Whatever it is, these pictures leaves me cold.

I suppose I’m a bit old fashioned. I enjoy life. I find people fascinating. I find women beautiful. And I believe that life, people and women are worth celebrating.

That’s what drives my art-making.

When Fabiano asked me to contribute an article for Camera Obscura, he suggested I pick a photograph that’s important to me and tell its story. This is the story of Katie’s Jump. 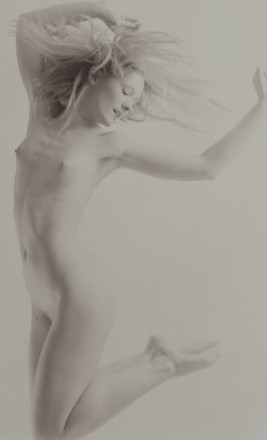 Katie is a dancer. She’s about 5’5”, beautiful and, like all serious dancers, has an astonishing physique. She’s enthusiastic, hard working and has a wicked sense of humor. She’s a movie star too!

When I work with someone for the first time I deliberately set my expectations low. We try a few things, experiment, and generally mess around. This helps me to avoid pre-conceived ideas which I find are often a deathblow for creativity. It also helps to us both to understand each other and to discover what we’re going to make together.

It was no different when Katie turned up for the first time at my studio in London. We made some pictures, we drank some tea, and we chatted. What soon became clear was that although we were sure to make some fabulous posed pictures, she was someone who needed to make dynamic pictures which fizzed with her energy. This, I knew, would be a huge challenge, but a worthwhile one I hoped. 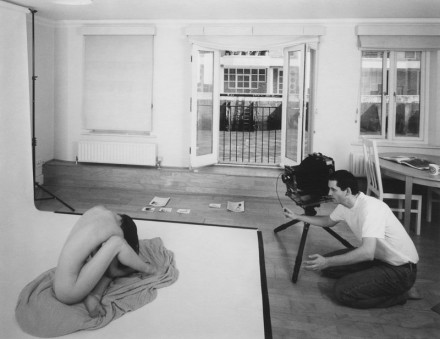 To understand why this was such a big deal it’s important to understand how I work in the studio. I use big, old-fashioned, wooden cameras (imagine a Victorian photographer with a blanket over his head and you won’t be far wrong). My favorite camera uses sheets of film 8”x10” in size, although I also use 4”x5” and 11”x14” film (that’s almost as big as A3).

When using these cameras I have to slow down, concentrate, and make sure that everything is set just right before tripping the shutter. Rush the job and I’ll lose the picture. It can sometimes take twenty minutes for me to make a single exposure.

Working slowly means that I have time to consider every aspect of the composition. Does this go with that? Should it be here or there? And how does it look as a whole. (It also requires great reserves of patience and stamina from my long suffering models, something I’m always grateful for.) This drives me towards making static, sculptural forms. 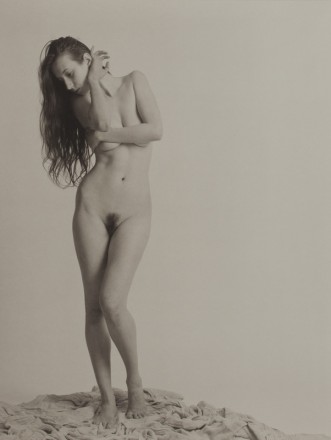 Trying to use these cameras to capture movement and energy is extremely difficult. But I had made some earlier motion work with another dancer (the fabulous Oksana) so I knew that it could be done, especially with a little bit of help from serendipity.

Over the next few weeks and months we made lots of exposures. Mostly we worked using the 8×10 camera, but we also made plenty with the 11×14 (and also some digital captures). As an aside, 11×14 film costs about £8 per sheet and I only have sufficient film holders to make 8 exposures in any session. This means that the pressure to ‘get the shot’ when working with the 11×14 is high. (I should also mention that my 11×14 is a do-it-yourself camera built from scraps of old cameras. It’s very heavy, wobbles all over the place, and if you stub your toe on it then your toe will break a long time before the camera will. It’s a joy to work with!)

We made Katie’s Jump quite early in the project and it’s definitely my favourite from the series. 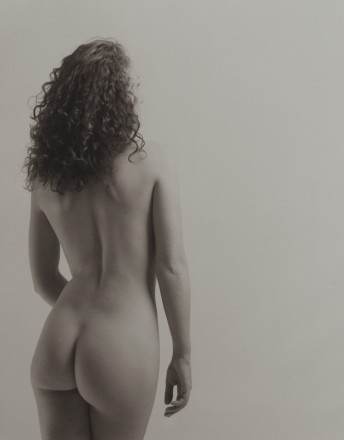 Katie’s Jump was made using the 11×14 camera. It was a straightforward set-up: camera low down on its massive tripod, some front rise, and no tilts. I probably used a 476mm lens, although I don’t remember for sure. There were two lights: one above and to the camera’s right, and one down and to the camera’s left. Technically very simple.

Katie jumped and I tripped the shutter. The lights flashed and the image was captured. In total we did this eight times. Because I was working with film, we couldn’t review the results so I put the film holders somewhere safe while we carried on with another camera.

Developing sheets of 11×14 film is not easy. I develop a stack of four sheets at a time, and working in total darkness I slowly move the stack of film through a series of big trays full of developing chemistry. The film must keep moving, must never be allowed to stick together, and I mustn’t allow any sharp corners to scratch the delicate emulsion.

I developed the 11×14 film a few days after our session. If I remember correctly I’d already processed some 8×10 film and it hadn’t turned out as I had hoped. Given the difficulties of using the 11×14 I had low expectations.

Once the light sensitive steps were completed I turned on the light to see what we’d made: although the first couple of sheets were not great, hiding at the bottom of the stack was this fabulous picture. I was thrilled! It’s difficult to read body language on a negative but I was sure it was, ‘the one’. I hung up the wet negative to dry in my bathroom overnight. (My girlfriend has this funny idea that bathrooms are for bathing in, not washing and drying film and prints. Hopefully one day she’ll understand…)

A few days later I made a test print from the negative.

I only make platinum prints. I was never very good at silver gelatin printing, and machine made prints don’t satisfy me. If you’ve not seen a real platinum print in the flesh then you must search one out. If you’re in the UK then you can find them in the V&A print collection or in many fine art photography exhibitions (or you can knock on my door). They are exquisite.

It’s quite easy to make a simple platinum print, but it takes many years to master the medium. I’ve been printing exclusively with platinum for five or six years now, and have made several thousand prints – but I’m still learning.

A platinum print requires a negative that’s the same size as the print you’re making. That’s why I use those big cameras. (Nowadays it’s possible to make digital negatives which allow you to work from other formats.) Everything is done by hand – mixing the coating from platinum (usually with some palladium too), painting it on to the purest paper you can find (I use Buxton which is handmade in France by Ruscombe Mill – it has a gorgeous texture), exposing the dried paper to ultraviolet light through the negative, and finally processing it in various odd chemicals. It takes effort, concentration and a lot of commitment, but the results are worth it. 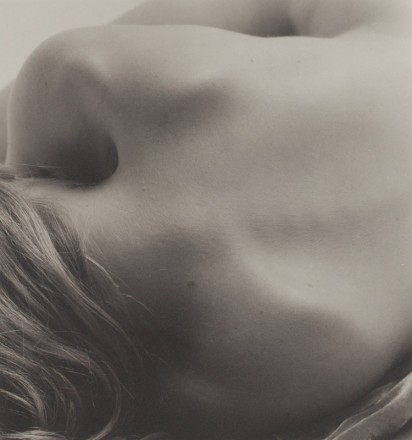 Anyway, I’ve digressed. A few days after developing the negative I made a test print, and then my first ‘final’ print. It was perfect.

Since then I’ve made several more ‘final’ prints from this negative, and every one has been better than the last. That’s one of the things I love about handmade prints. Every print is different due to their inherent variability. And every time I print from a negative I learn more about it and how it likes to be presented. It’s a constant evolution.

My current ‘final’ print for Katie’s Jump is in a very delicate high key. There are almost no deep shadows, and no blacks. The highlights have a slight creaminess to them. It’s cropped to about 13.5”x8.5” and mounted on a large sheet of Chateau Vellum paper (also from Ruscombe Mill). The final artwork is approximately 22”x15” with a mix of natural and torn edges.

So other than it being a physically beautiful print featuring a beautiful young woman who is full of vitality (but who somehow mislaid her clothes), why is this picture so important to me?

This picture, I believe, achieves all of this. Several of my collectors have it on their wall, Katie loves it, and I still get a buzz every time I look at it.

In fact, at the risk of sounding self-indulgent, I’ve just had to take a break from writing in order to sneak a peak at my copy of this print.

Looking at it now, I’m reminded how much I love the narrow space between her body and the edge of the frame, the way her hands and knees refuse to be constrained by the edge of the picture, and the way that her expression is serene even in the midst of such a burst of energy. But I also love the delicate tones that seem to glow from inside the paper, its texture, and its absolutely matte finish. And I’ve got that buzz which makes me want to rush into my studio and make more pictures.

That’s why this picture is so important to me. 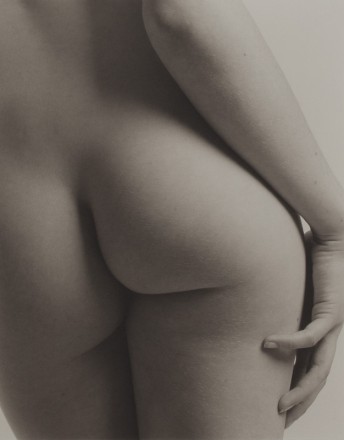